The Misfits of the Spaceways are Back -- Big Time! 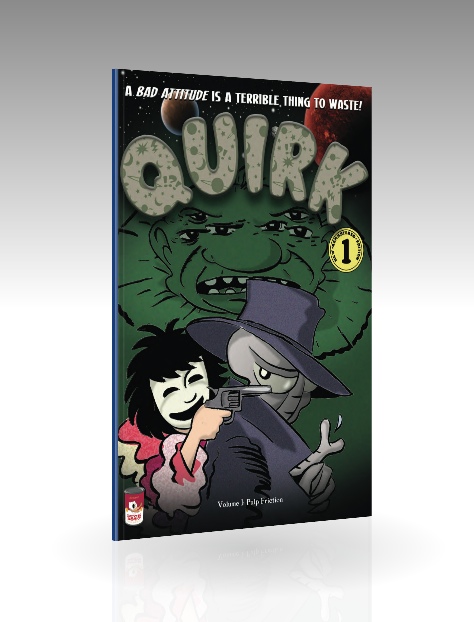 It's kind of disturbing to me to note that my latest book, Quirk Volume 1: Pulp Friction, has been something like 28 years in the making! The very first story included in the volume, "Knight's Gambit," was begun in the early '80s and never completed until more than a decade later. But those original 20-something pages of story and art from the first version were so primitive compared to what I'm capable of now that I knew they would have to be re-written and re-drawn for this book. And so, the first 16 pages of "Knight's Gambit" are all-new work, the next few pages that follow are a mix of new work and individual panels from the original version, and the climactic final third are the unaltered finished pages from the mid-'90s! It's kind of a Fronkonsteen Monster of a story that way, but I think that actually adds a layer of interest, and shows graphically how Things Change and -- we hope! -- get better over time.

To celebrate the release of the new book, I'm making the first issue of the latest Quirk eComic series available here as a free download. This is the PDF version and is universally compatible with all devices and operating systems. This first issue includes "A-Muck Time," just one of the three stories included in the new paperback. It also sports a whole mess of Special Features introducing the characters and providing plenty of background info so that new readers can get to speed real fast. It's my hope that if you like what you'll see, you'll help support an independent creator and buy the paperback. Just click anywhere in this paragraph to get your free download.

"A-Muck Time" is a big story for the Quirkiverse! It's not just a sly parody of both Star Trek and Superman -- it's also the first official Origin Story given to any of the regular cast... specifically, it's all about Sludge -- that sentient glob of goo from the disgustingly moist planet Grundge. I had a lot of fun making it back when Quirk made his first appearance on the internet as a weekly web comic, way, way back in the '90s. I hope you'll have fun reading it!

You can also download the free comic from the new QUIRK page that's accessible by the tabs at the top of this blog. That's where you'll find the YouTube video trailer for the series (check it out if you haven't already!), and links to order the book from its own dedicated online shop or from Amazon, B&N and a variety of other on and offline retailers (as it becomes available from them).

As for me, I'm going to take a slight break this afternoon... but not for long! I have plans in store for more new books than you can shake a stick at (although why anyone would want to shake a stick at anything is anyone's guess), and Time's a' Wastin'!

Quirk will be back before the end of the year with Volume 2: Termination Alley, along with Volume 2 of Tinsel*Town, a new fantasy/SF/action/adventure novel called See Them Dance, the new Tarot of the Zirkus Magi  (already getting a lot of advance support, thanks to you all!) that compliments STD, a non-fiction book  called Bookman, about a genuine American eccentric and folk artist, and our first-ever children's book, illustrated by the late Barbara Thornsjo, titled Under The Rooster Weathervane. And that's just what I have left to do in 2013! Next year will see lots more. Stay with me here! I need all the help I can get!

And thank you. In the last month and a half this site has shot past the 50,000 hits mark and reached nearly 65,000 hits. That is amazing to me, and I'm grateful to you all for stopping by.