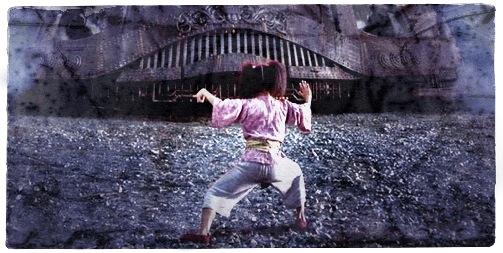 Folks who dislike movies that have any kind of twinkle in their eye, who believe that everything belongs in its proper place — that’s right, the purists among you — are likely to be more than a little bit put off by last year’s action import from China, Tai Chi Zero. Me? I thought it was an absolute unalloyed GAS!

— And this high-speed blender of a movie doesn’t stop there. It borrows as heavily from the conventions of silent film (including the silent movie practice of announcing the names of the characters and the actors playing them, via title cards, as they make their entrance into the story) as it does from those of Japanese Anime, comic books and, yes, computer games.

Sometimes the movie even feels and sounds like a food processor in action. WHIRRRRRRRRR! It tingles and vibrates with life. It is almost supremely silly — in exactly the right Monty Python meets Jules Verne meets Kung Fu kind of way. You might be one of those Graham Chapman types who respond to the picture by shaking your stick at it and saying, “Stop that! It’s silly!” — or you might be a duck and dive right in.

Call me a duck. Well, this ain’t Duck Soup Productions for nothing.

If its action scenes are a bit too much made up of fast shots and quick edits (and they are) and the story is dead simple (and it is)… it’s no accident, it’s a choice. If you’re looking for Akira Kurasawa or even Bruce Lee, look elsewhere. Tai Chi Zero is a pure Pop Culture bubblegum smack-down, the movie equivalent of the most likable Village Idiot you ever met.

The film revels in its own contradictions. It uses every ultra-modern computer enhanced trick in the book to tell the story of an isolated Chinese town, so steeped in tradition that it’s less than welcoming to even the most well-meaning of outsiders, which is being Menaced by Modernity in the form of a Railroad company whose masters are not above using steam-powered Giant Robots to clear the way for the laying of its tracks. The message — and it’s a good one — seems to be that Tradition and Modernity can find a happy middle ground when Wisdom and Harmony prevail (as they do in the hearts of the filmmakers); but Humankind is such a rapacious breed that Wisdom and Harmony are seldom to be found in our playbooks.

One of the best aspects of the picture, story-wise, is that everyone in it, including the villains, has a point. Everyone is right, from their own point of view. The chief villain is a badly conflicted fellow whose mind is made up for him by the impulsiveness of the heroes. We’re all on the same side; in the end, we just disagree on the details.

There’s an appealing little love story nestled in the midst of this: the hero is a good-hearted dope with a lot of natural ability but no skill, while the heroine is all refinement with a lousy taste in men.

Simplistic, yes. Too ornate, too busy? That’s your call. This is a movie that just wants to give you a lot to look at, a lot to smile about, and a lot of reasons to stomp the floor. The follow-up, Tai Chi Hero, is on its way to my mailbox as I type this. I can hardly wait!