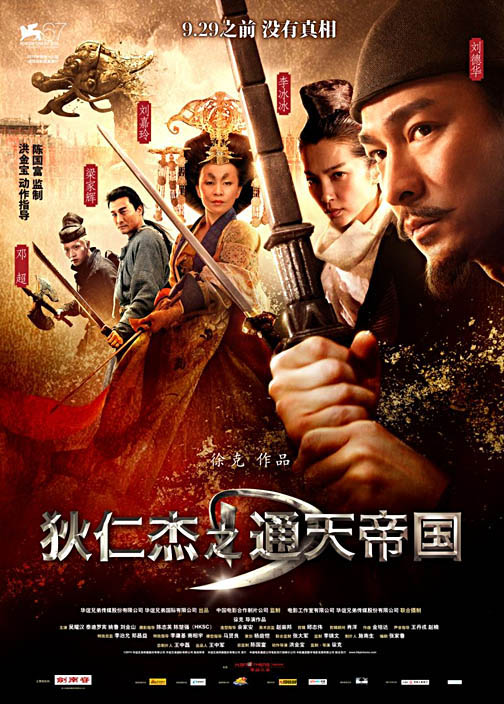 Midway through the watching of Detective Dee and the Mystery of the Phantom Flame, as giddlily absurd a movie as will ever come down the pike, I could imagine turning to my partner (if I had such a thing) and asking her,  "D'you understand what's going on?" To which she would no doubt reply, if there was a there there, "Not at all. But it's kind of fun. . ."

I'm a big fan of Ang Lee's Crouching Tiger, Hidden Dragon for the way in which its high-flying action rises out of the emotions and inner conflicts of the characters. This is just what Marvel Comics useed to do so well back in the day, and what they've forgotten how to do for well over thirty years now. Egad. Marvel has been dead to me for longer than it was alive.

If Stan Lee provided the deeply identifiable character tropes of Marvel's heydey, it was Jack Kirby who provided the violence: and because the violence was always about something, because both the heroes and the villains had something personal at stake, it became poetry.

For this reason, I've always felt comfortable comparing Marvel at its best to Shakespeare: the conflicts are genuine and deep and are about more than just robbing banks and taking over the world. You'll find the same soap-opera complicated plots in Shakespeare; but instead of reciting poetry, comics at their purest present visual poetry in the charefully choreographed display of Violence as Dance.

Crouching Tiger was no different. I liked it because the Romantic leads were even more repressed than I am, and could only express their emotions in flight and fight. When Michelle Yeoh (a goddess by any standard) and Zhang Ziyi square off against each other in a vicious battle with swords, spears and clubs, it is a personal thing: betrayal and denial  and Ziyi's craving for, among other things, the unconditional love of an older sister -- which Yeoh refuses to give, because she must, because she's lived longer and she knows that everything comes with a condition. It's that emotional context that gives the admittedly astonishing fight coreography that follows its weight.

Having watched Crouching Tiger many times, and In the mood for something similar (because Marvel Comics just doesn't do it for me anymore),  I ordered up several Hong Kong martial arts films. I expected them to be a mixed bag. I didn't expect the extreme differences in style, all of which go a lot deeper than the similarities.

It's not all Wuxia, the specific genre of Crouching Tiger that combines costume drama and martial arts with flat-out fantasy; and it certainly doesn't all carry the emotional weight of Tiger, but I'm enjoying the discovery and anxious to see more.

First up was Ip Man (which somehow triggers the old Batman theme song in my mind). This is a more or less straightforward biopic about Bruce Lee's mentor and teacher, whose spirit was tested during the Japanese occupation of China in WWII.Though at its core a true story, it feels like a fantasy thanks in part to the enthusiatic action scenes (directed by Sammo Hung, whom you may remember from Martial Law a while back); but it's saying something to note that the distopian harshness of its second half, while real, plays like the bleak futureworlds we have become familiar with in modern science fantasies from Blade Runner on. Perhaps by being so pervasive, these dark visions are unfair to their audiences by distancing the despair. What we see in Ip Man is presumably real, and as bleak as it comes.

The first third or so of Ip Man (bada-dada-dada-dada-dada) is openly lighthearted, building upon the old saw that it doesn't pay to be the best in any form of combat, because the Young Turks all full of themselves will come after you and do their damndest to take you down. The humor of these earlier scenes comes simply from the fact that our hero is not so easy to take down. Before a polite after-dinner bout, he indicates to his wife that "This won't take long." At another, admonished not to break any of the furniture, one challenger proceeds to do just that.
"I'll pay, I'll pay!" he cries, and although he gets his hat handed to him in what follows, one feels that Donnie Yen as the title character has a much worse punishment in store coming from The Wife.

But the tone changes quite suddenly as the Japanese occupation begins, and the film is to be admired for not taking the road of High Fantasy and having the Hero single handedly repel the invasion. Instead, what follows is something more similar to the holocaust, with the local marshal-arts legends forced to duke it out in the arena. Win, and you might get a sack of rice to take home to your family; lose, and you're likely to get a bullet in the back of your head.

As serious as Ip Man ultimately gets, Detective Dee and the Mystery of the Phantom Flame is more like a cinematic flourish,  so far from Crouching Tiger that it could represent a different genre altogether. The deceptor here is that the Detective Dee is as straight-faced and serious as they come -- but if you take it seriously even for a moment, you are in for a quick and rude awakening.

The year is 689 of the Tang Dynasty, and the regent Wu is about to become the first female Emperor of China. This much of the story is actually true, but prepare to leave Reality behind.

In honor of her coronation, a gigantic Buddha is being erected, not coincidentally directly over the Empress's palace. Work is coming along nicely until the key architects of the Buddha start bursting spectacularly into spontaneous flames -- in order to solve the mystery of these deaths before her coronation, the Empress frees an old adversary from captivity, Detective Dee.

That's as much sense as I could make out of it. The events and setpieces in Detective Dee come with the arbitrary quality  of a particularly vivid dream, and the picture can be enjoyed on that level as an entertainment that drives escapism so far from coherence that it's best to just sit back and enjoy the ride. It is never less than surreal -- faceless antigonists whose limbs can separate from their body and re-attach to it are not the most outre experiences that our hero encounters as he moves toward unravelling the secret.

I confess that I was put off at first by the movie's out-and-out unwillingness to embrace anything resembling a familiar narrative convention (even the action scenes, again directed by Sammo Hung, are tough to follow). But about the time that a bunch of stags (yes, stags) start talking and attacking Detective Dee I gave myself over to this strange and frequently eerie little number. Looked at as fantasy, there's a bizarre internal logic at work like what is sometimes found in the great  animated films of Haiao Miyazaki. The visuals, even when some below-par CGI comes into play, are never less than entrancing and evokative.

The cast, with their somber expressions and doubting eyes, do their best to sell it. The action flies high with a blend of Wuxia levitation and the uncanny manipilation of whips, arrows and darts. The only thing really lacking is the emotional depth to raise this cheeky, unusual item into something more than an actioner on LSD.