Would THE AVENGERS by Any Other Name Smell as Ripe? 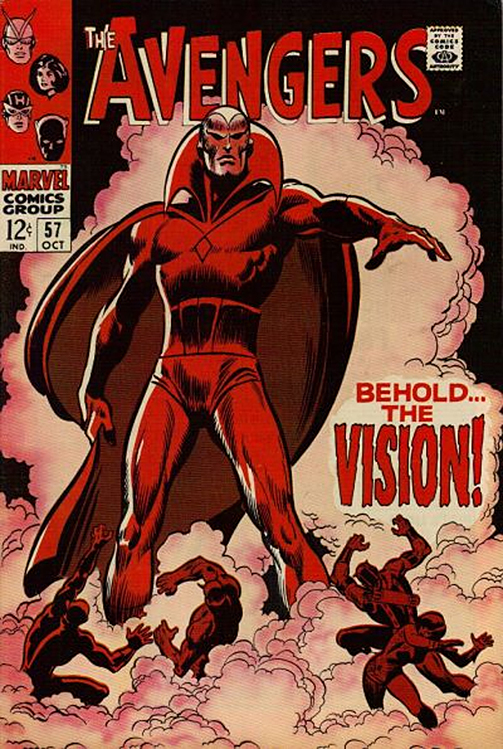 For me, The Avengers have always been, and will always be, John Steed and Emma Peel as played by Patrick MacNee and Diana Rigg. Honestly, when I was first exposed to Marvel Comics' Avengers in the late '70s and early '80s, this was a bothersome issue to my fussy, nit-pickety brain: How can Stan Lee get away with stealing the name of THE AVENGERS? THE AVENGERS is a British TV show. This isn't right!

This wasn't my only problem with Marvel's Avengers. Although its supporting cast boasted such colorful characters as Hawkeye, The Scarlet Witch and her eventual beau, the android Vision (pictured above), the core team was always Iron Man, Captain America, Thor and Ant-Man (yes, they started out with The Hulk as a team member, but he proved unmanageable and soon instead of buddying up with him they were hunting him down -- some friends they are!). It was the whole, and openly stated, reason for the series -- to answer the demand for a team-up of Marvel's most powerful solo characters.

But even while Stan Lee was writing it, there was little of interest that he could do with those characters, as they all had their own separate storylines going on in their own individual series. And so The Avengers became a repository of the kind of plotting Stan had perfected in The Fantastic Four: Get all these different temperaments in the same room, stir 'em up, and let them fight among themselves while the Villain of the Month digs his heels in and nearly succeeds in bringing his scheme to fruition. Then and only then will Our Heroes realize that they have to put their petty differences aside and pool their resources to send the likes of Kang the Conqueror nee Rama-Tut nee Doctor Doom back across the event horizon.

The Avengers were always putting aside their petty differences. They never learned to leave each other alone when they weren't pounding villains into the pavement.

It was entertaining, but not being a Team Player myself I liked these characters best in their solo series.

Up until about two years ago, I would have told you that The Avengers was one of those funny books that was completely unfilmable. That they proved me wrong, and that the resulting movie is actually sort of good at various moments in its runtime is to Marvel's credit. But I still defy Joe and Jane Average to walk in off the street having never seen any of the other Marvel movies (starting with Iron Man) and be able to make a lick of sense out of the thing.

Has the demographic really changed all that much? Has it really become plausible that a studio could and would spend hundreds of millions of dollars to make a movie that is specifically unwatchable by a mass audience, that is geared only towards the Comic Book Geeks who are still, I would think, a fringe market?

I guess so. Who'da thunk it?

No doubt my viewing was colored by the unpleasant physical experience of going out to see it. I generally prefer my library and DVD player to the movie-house experience, and this was worse than average. The house was fully packed, I was hemmed in on both sides, like a Tuna Fish in a Sardine Can, if that makes any sense. The only good thing about it was that it did allow me to compare the audience reaction to that of the second Pirates of the Caribbean movie, which I saw in a similarly loaded theater.

The audience at Pirates hooted and applauded and stomped their feet on the floor. They cheered and roared. At The Avengers, the audience laughed at a couple of the predictable Laugh Moments, but were otherwise silent.

Sort of speaks for itself, hmm?

The in-fighting at the core of the movie is pure Marvel fun, and is probably what the mass audience will fall for, never having seen this sort of thing in a superhero movie. Yes, the very first thing all these "heroes" do when they get together is try to beat each other up. They all seem to be asking "How big is yours?" I'd still lay my money on The Hulk. They say that the madder Hulk gets, the bigger he gets.

But the set-up at the beginning of the film is Plain Tedious, the villain is too small a threat and spends too much of the move basically standing around, and the last half hour is sheer torture. How freakin' long can you destroy Manhattan with unconvincing CGI non-entities? Even the hand-to-hand combat is boring: it's obvious that Scarlett Johansen and the others are just doing kung-fu moves to the empty air, that they face enemies of no physical substance who are added in later as special effects.

But the movie's largest problem is its lack of Soul. Joss Whedon does what Joss Whedon always does: serve up a meal that looks to be very well thought-out, but turns into air the minute you bite into it. As the individual members of The Avengers part company at the end of the move, we should be left with something to care about.

Even the worst episode of the old Bill Bixby Incredible Hulk TV series used to be able to strike a note of wistfulness, or sadness, or some other emotion in the final fade-out. Joss Whedon's Avengers doesn't even leave you looking forward to their return.

I guess that the heart of the movie is supposed to be SHIELD, that super-secret organization whose machinations are felt throughout Marvel's line of funnybook titles. But by making SHIELD into nothing more than the catalyst for the heroes to get together, the agency becomes -- well, nothing more than a Hollywood kind of agency, a casting company to assemble a package. (For non-funnybook types out there, this is emphatically NOT the way the original Avengers came about!)

And don't even get me started about Whedon killing off Agent Coulson.  Much more so than Samuel Jackson's misbegotten Nick Fury (which strikes me as a little bit like casting a black guy as Rooster Cogburn or Sam Spade), Coulson is the backbone of the Movie Franchise version of SHIELD: he is, or was, the best thing to come out of the movie series, having been lurking about with his wonderful deadpan since the first Iron Man movie.

The unspoken word of his dying statement is typical of the shallowness and self-reverent times that we live in. Whedon forces arrogant Dying Words into the mouth of a humble man. Without his death, Iron Man, Captain America and the others would have nothing to avenge?

What about the hundreds, nay, thousands of Manhattanites who perish, unseen and unmourned, in the final half hour of the picture as a new 9/11 of Hiroshima proportions is rained down upon New York?