On the Straight and Arrow 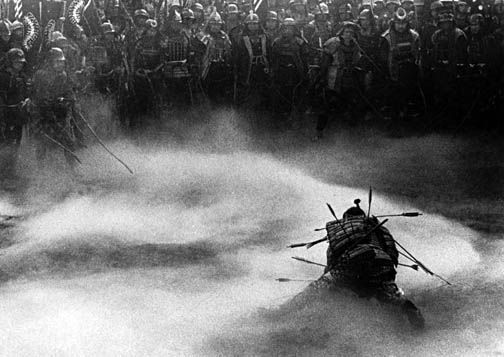 It's only fair to follow up my thoughts on The Avengers with those on an equally "light and frothy" movie from the past (the quotes are to show that I'm being sarcastic): Kurasawa's Throne of Blood. Again (I've typed this enough times that it is monotonous to me) this is something I've seen only once before, so many years ago that I might never have seen it at all. The only part of it that I remembered was the ending -- but if you've ever seen the ending of Throne of Blood, you'll never forget it.

Point of interest: there are only about two close-ups in the entire first half-hour, and because they are so scarce they land with a powerful impact. Mifune gets the first one, and here we note that Washira in Throne of Blood is one of his most stylized performances, resonating with Bunraku and all the other traditions of Japanese art and craft: it's *BIG* and scowling and even a bit grotesque. Kurasawa is wise to shoot him mostly in long shots, although the thing that allows Mifune to get away with something this far over the top is that it seems to be deeply felt and genuine.

I wonder how many times Kurasawa had to shoot the fog that rolls through so many of the scenes in order to get it just right. And it is Just Right: it's not going too far to say that fog is both a character in and the narrator of the movie, that the kind of Japanese Greek Chorus that opens and closes the story is actually the voice of the fog. The mysticism of Shakespeare, it turns out, is perfectly suited for the Japanese treatment, and you almost wish that Kurasawa had tackled more of The Bard's plays.

It's a simple story, telegraphed well in advance by Washira's encounter with the corporal form of a forest spirit, here replacing the three witches with their histrionic toil and trouble. Indeed, that's the whole point: that everything is written, that men do not have free will at all, that Washira/Macbeth is doomed to follow his fate even when he's had enough Advance Warning to well avoid it. Even when the predictions of the Forest Spirit are patently ridiculous, somehow they all come true.

Forests play a large part in both Macbeth and Lord of the Rings, and one wonders if Tolkein was borrowing more or less consciously from Shakespeare (or, more likely, the same mythic sources that Shakespeare was borrowing from) when he planned the victories at Helm's Deep and Isengard as aided by the trees. Either way, Peter Jackson's computer-driven solution in the movie version, though entertaining as all get-out, is nowhere near as effective as the two shots in Kurasawa's movie that show the trees advancing through that selfsame fog as if by magic.

Look at any picture of actress Isuzu Yamada out of her Throne of Blood / Lady Macbeth make-up, and she looks like a nice person; but she's at the heart of one of the most mortifying shots in the movie. From the moment we first see her character, she speaketh treason; but she speaketh it with her face downturned, her eyes averted in the respectful manner of her position. But there comes a time in the conversation when she wants to make a particular point: and she raises her stark, painted face and fixes her eyes on her husband's just as if he's a moth about to pinned down on a specimen sheet. It's a shot worthy of any screen monster, a shot as horrifying as any you'll find in a really good Monster Movie. Mifune recoils into himself at the sight. Me, if I were in his sandals I'd have screamed and run from the building.

Come to think of it, that might have been the wisest action for Washira to take.

The original Japanese title of Throne of Blood is Spider's Web Castle. I can see why the American distributors changed it to something punchier, but I like the original title best. Both are descriptive in their own way, but the Japanese title is ripe with images of its characters twisting away against the fates, against all hope: a bit like the ending of the original 1958 version of The Fly: "Help me, help me!"