In the Shadow of 4 East: Shades of Grey 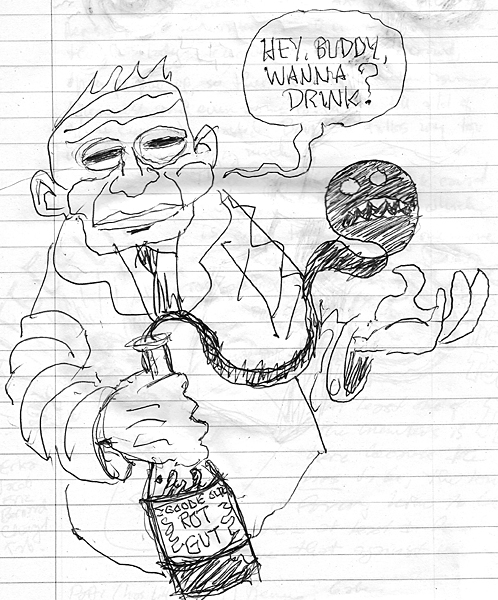 Yesterday, booze threw down its first serious challenge since the day I walked free from 4 East. Although I'm not sure it was so much about the booze as it was about desire: specifically, the desire to be something other than what I am.

I was doing my post-workday shopping at the stupormarket, feeling fine and strong, when I turned down into the potato chip aisle, which not coincidentally the store managers have set up so that you have to walk past the booze to get to the chips (or vice versa). On the lower shelves were all the brands of vodka that I abused and misused: I gave them a sneer and walked past them untempted.

But then my gaze settled on a black bottle of liquour. The label was off-white and had a drawing on it of a gnarled old tree.

It was the designer in me that was tempted. The bottle was simply beautiful to look at, very dark and gothic, an object  all by itself that you might set on a study shelf and admire while you settled back into your velvet chair and sipped vampirically at the contents.

I picked it up and held it in my hands. The glass was thick and heavy. I was so struck by the beauty of the thing as an object that I confess feeling covetously towards it.

I thought: It's not booze, it's a liquour. Wow, it's gorgeous. I know just the shelf I'd put it on. Up in the Halloween room.

In more ways than one, I've been attempting to re-make myself lately. To make myself over. More about that next time, I hope. The designer in me who is working on that makeover thought: this is just the sort of thing a gentleman of style in which you imagine yourself becoming would have in his collection.

That's what Madison Avenue does, isn't it? That's what design has become: a tool appealing to the imagination, a drug carrying the scent of the person you imagine yourself to be.

Then I thought: You know you'd drink it.

-- All right. So what if I did. A little nightcap just before bed, taken slowly as I relax before the television. What of it?

I thought: You know what would happen.

-- Everything is black and white to Americans. Everything is either Good or Evil. Europeans have a much more sensible view, they see shades, they see the benefits of drinking in moderation, as part of a happy lifestyle. Why do Americans have to demonize absolutely everything? Wow. This bottle is freakin' gorgeous.

I thought: You might drink it in moderation at first. You might even be able to go on that way for months. But you know what would happen, sooner or later.

I thought: You'd be buying vodka in Nothing Flat.

With a CONSIDERABLE amount of regret, I put that beautiful, gothic black bottle back on the shelf. By the time I turned into the next aisle I was thinking of something else.

So much faith is poured into A.A. that even people who will never go to a meeting believe that an alcoholic can't quit without it. For my part, I'm not saying that I will never go to another meeting. I know where they are if I need them. But the beneficial part of A.A. is all about dialogue, and the people who absolutely need A.A. are the ones who cannot carry on an objective inner dialogue with themselves, who cannot divide their mixed feelings into separate entities and carry out the arguments faithfully, in character, not sparing any of the details.

Does this mean that the writer in me is coming back? I carry my own meetings around with me: the name is Legion, and like all good fiction the conflict defines the shades, and which ones will dominate.