Leaves from The Book of Tarot 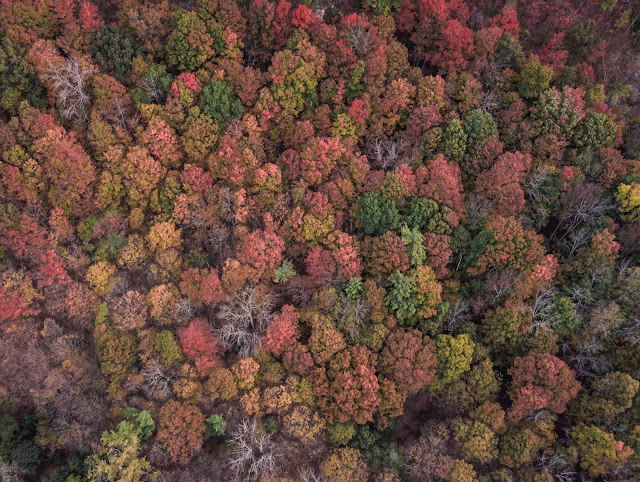 Almost by accident, it’s turned into the most colorful fall ever for Duck Soup Productions.

That’s because almost two years of work across several projects have all reached fruition at just about the same time, with no less than four big new deck releases happening in almost as many weeks!

I certainly didn’t plan it this way, and wouldn’t have: since I think it’s better to pace new releases across a period of months. But they say things happen for a reason… although in this case the “reason” may simply be the law of averages!

First up was the Revised & Refined 2nd Edition of The Arthur Rackham Oracle, which successfully funded at Kickstarter and has been available for sale since early September. With its heavy cardboard box, gold edging and gorgeously printed images on heavy art paper, this is a truly deluxe deck, a deck that would command prices of $75 or more had not the Kickstarter campaign have been so successful. Instead,  it’s priced at just $35, and worth every penny. With its evocative images created by one of the worlds’ greatest illustrators, paired thoughtfully with keywords designed to challenge and inspire, The Arthur Rackham Oracle is one of the most evocative and effective decks you will ever own. And you know — it’s not too early to start thinking about the Winter Holidays! This is a deck that would make a striking holiday gift, at a reasonable cost.

Mid-September saw the debut of The Zirkus Mägi Classic Bavarian Oracle. This is the first time that I’ve attempted to create a “kipper” deck: interest in this almost-forgotten style of fortune-telling deck was resuscitated a couple of years back when popular Tarot artist Ciro Marchetti created his Fin de Siècle Kipper, designed in a lush Victorian style. Indeed, the kipper lends itself to a vintage approach, and so when the time came to create one of my own I thought it best to stick with a style that’s become familiar to me, that retro-themed carnival aspect of the Zirkus Mägi. The result is colorful and comfortable, showing a side of the Zirkus that we haven’t seen before, a peak into the Private Lives of the performers themselves. Comprised almost entirely of new images, the Classic Bavarian Oracle may not be a tool for everyone — but on the other hand, it provides an “easy in” to this unique vintage system.

Just this past week, the work of nearly two years was completed with the release of the Daringly Different TAROT DADA. When I first started work on this deck, in late 2017, I don’t think people knew what to expect or how it would come together. But as the images started to preview on my Facebook page, the response was both enthusiastic and gratifying. Dada has its heart in joyful nonsense, but I could not allow the card images to be completely nonsensical: the challenge with this deck was to find meaning in abstraction and a surreal approach, and with a fair amount of revisions and corrections along the way, I think that I finally struck the right balance. 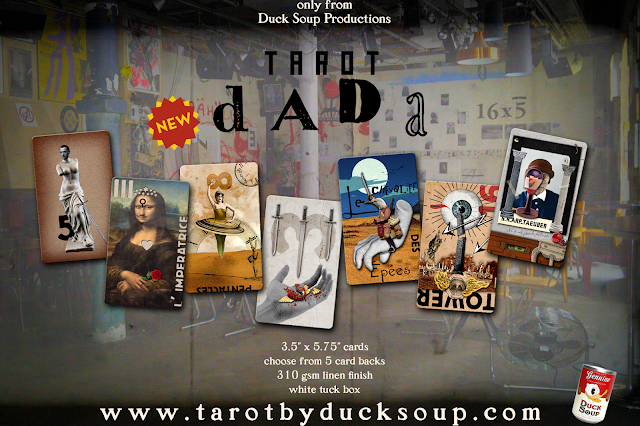 The creation of a tarot deck could be likened to the creation of a novel — both have a beginning, middle and end, and both require dedication over a long period of time. The average novel runs between 75,000 to 120,000 words, while a tarot pack requires 78 separate images each playing a unique part yet contributing to the structure of the whole. Even when you work as quickly as I do, that’s a lot of images; and if a picture is worth a thousand words, a tarot pack indeed weighs in as a short novel at 78,000 words.

Like all the decks that I’ve worked on, TAROT DADA has been great fun, and a large challenge. Even when an artist is trying to do something different, there are traditions, customs and card meanings that must be upheld and respected. That latter part was a particular challenge for TAROT DADA: because the art movement that inspired it is all about shattering rules and breaking traditions. I hope that I have been able to do that while still creating a deck that is readable and relatable. Only time will tell whether or not I have succeeded.

And now, today, I can announce the release of the latest in my series of “Playroom Oracles” — unique oracle packs derived from the wisdom and art of vintage children’s books. The new title is THE BIRD CHILDREN ORACLE, and as the title suggests, it is a sort of sequel to THE ANIMAL CHILDREN ORACLE. Both decks feature art by M.T. Ross, and in addition to working as a stand-alone oracle pack, the BIRD CHILDREN was specifically created to combine with the ANIMAL CHILDREN into a single, supremely versatile 140-card pack! To facilitate this, the card back options are the same. More than that, there are no repeating keywords or core meanings between the two decks, and even the two significator cards in each pack reflect male and female roles at differing stages of life. You will not find a more adaptable oracle system than this.

So there you have it. With the leaves already changing color (and beginning to fall) and the days growing shorter and shorter, it’s kind of nice to know that in 2019 I managed, without even planning it this way, to pull a real Fall Harvest out of my Tarot bag! After a short break to read, recharge, and deal with Other Tasks that have gone by the boards while I worked on getting these decks out, I’ll be selecting my Winter tarot design projects and hunkering down once again. I’ve got a lot of ideas to choose from, and if fortune permits we’ll all still be here in 2020 to harvest again. I wish you all a healthy and happy Fall season, and hope that you enjoy my crop of cards for this year!