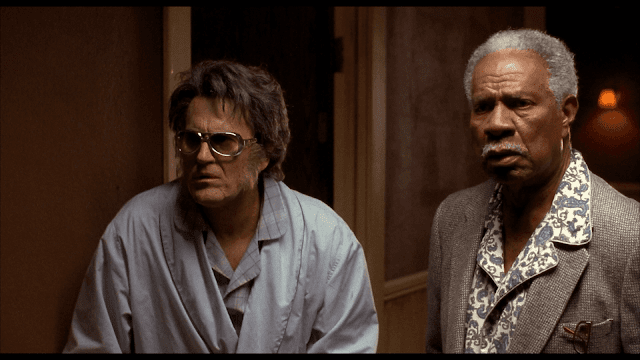 October of 2019 has already been exceptionally good to this Old Geezer who thought he’d seen all the good Horror Movies that were there to be seen. In addition to some old favorites, my nightly Fright-Film Fest has already turned up THREE (count ‘em!) new-to-me screamers that may not be classics, exactly, but which do the genre up right as a rain of pumpkins!

First was William Castle's gimmicky, harmless 13 GHOSTS — filmed in Illusion-o! Castle is considered the master of Contrivance, and the Contrived Contraption that he personally reveals in a fourth-wall-shattering introduction is nothing more than a classic ’50s 3-D viewer, shaped like a ghost and with the blue and red filters stacked one on top of the other instead of side-by-side. Fortunately, the DuckHaus counts several pairs of old-style 3-D eyewear among its protected possessions, so viewing the picture as it was meant to be viewed was not an issue.

No, the film is not a 3-D headache-fest, but uses the process in several isolated sequences to accomplish its ghost effects. For no reason other than to give the viewer fair warning, the screen goes dark at various times to allow the audience to select from the “believer” or “non-believer” spectrums of ghost-watching. Inevitably, you’ll want to try both — and watch as the actors react either to empty space, or to, say, spooky ghostly lion tamers. It’s your choice… and it's a pretty good gimmick.  Castle finds a couple of ways to work it into the plot: for not only did a dead eccentric scientist leave one such pair of Ghost-Viewers for the characters in the movie, but why is it that one ghost in the girl’s bedroom (easily the ghastliest ghost in the whole picture) can be seen by us without the viewer? Hmm? Why is that? The whole thing is goofy, silly, Halloween fun — and not scary in the slightest. Among the cast of talented actors (either climbing the Hollywood ladder or coming down it), squeaky-clean Martin Milner is cast effectively against type, and Margaret Hamilton seems perfectly happy to be in on the joke when Junior refers to her as the witch that comes with the house!

Thirteen Ghosts was later re-made in the depraved modern manner, filled to the brim with messy studies into the many disgusting ways that human body can be taken apart. Be very very certain when you check out of the movie store that you’re getting the 1960 version. It’s as good-natured as Leave It to Beaver, but with a vintage funhouse appeal. Like many another picture from bygone days, it has been restored to a condition that belies its age. It’s good, funny, seasonal fun, and its only serious flaw lies in the set decoration: such a spooky home exterior (apparently Castle used stock footage of a side entrance to the Winchester mystery house — more on that in a moment) deserves an equally spooky interior, but all the sets are '50s-bland. Still — these 13 Ghosts, vintage 1960, are keepers!

The interwebs have been whispering about BUBBA HO-TEP for years now, but increasingly in our self-defined culture it is difficult to decide when recommendations are valid and whether or not one should  trouble to call something forth from the Stygian Depths, Because Reasons. High Concepts can sometimes cover bargain basement ineptitude or intellectual twaddle, and BUBBA HO-TEP’s High Concept is not only prodigiously high, but of a uniquely Bounce-Off-The-Wall Weirdness. There are a million and a half ways that a picture of this sort can go off the rails, and most of them do just that. BUBBA HO-TEP manages somehow to stay on the Funhouse track.

It is much more than just an inventive pop-rocks take on the old Mummy saw. Some of its humor walks dangerously close to vulgarity, while some of its horror just skirts the issue of gore, but in the end it’s a balancing act that pays off in style and enjoyably spooky fun. Don’t watch the trailer: it reveals too much, as do most reviews. BUBBA HO-TEP is best approached from a state of purity and ignorance. Relax and let Bruce Campbell and Ossie Davis do that thing they do in the leading parts, and open your mind to possibility. Y' gotta take this one on faith, monster and pop culture fans... run, do not shamble. BUBBA HO-TEP is the Real Deal.

The corporate-owned and neatly muzzled critics of the shill media were not kind to last year's WINCHESTER, starring Helen Mirren and Jason Clarke — and that should tell you something. Critics don’t have to think anymore, and rather resent it when they are required to do so. The big corporate conglomerates that own the papers and pay the salaries know that they can count on their critical Igors to lavishly praise the latest hollow Big Studio Product to the skies, and churn out “reviews” that are nothing more than press releases lacking both credibility and integrity. Not even audience reviews can be trusted anymore, because audiences are increasingly made up of the born-yesterday crowd who have the cultural knowledge and sensitivities of a tapeworm.

WINCHESTER was almost certainly not violent enough or depraved enough for that crowd: it is a horror movie in the old style, returning the form to the days when suggestion and dread and implication were valued over shock and sick sadism.

In the manner of blogs, I now dip into that most egregious of critical devices, the Personal Backstory. My one regret in two visits to the West Coast is that I have never visited the Winchester house, the real, honest-to-gosh place upon which this movie hangs its extravagant fiction. Really, the Winchester house is much more than just a structure: it doesn’t have a story, it is a story; and a great story at that.

At this point there are so many different versions of that story that one can forgive the departures from factuality that were a necessity to make this an out-and-out horror movie. As in THE WOMAN IN BLACK, a film with which this one has a lot in common, the picture relies on jump-scares that are plentiful enough but not very jumpy. It is also wonderfully tactile, a beautiful Time-Travel sort of movie that takes us palpably back to the time period in which it's set. And it’s the atmosphere of vintage dread that WINCHESTER creates that drives this film. Like the great old Universal horror movies where the monsters come out of the fog and pose for for you, WINCHESTER makes a stylish presentation of its monster: and the monster in question, as it really should be, is the uncontrolled possession and manufacture of firearms.

That makes WINCHESTER about as topical a horror movie as they come. Its conscious decision to dial back on the gore is in line with its principles about gun violence. There are parallels here with some other great modern horror films that are also worth your attention: THE ORPHANAGE and THE BABADOOK and WINCHESTER have more on their minds than just wanting to scare you. Their real theme, all three, is human grief; how to face it, how to acknowledge it, and even how we must tame it. Grief is the Monster in the Room that we must all confront, sooner or later. This is the sort of theme that requires Real Actors, not just screamers, and everyone in WINCHESTER is up to the mark, most especially the great and almost ageless Helen Mirren.

Alas, not all my forays into the macabre this season have been happy ones.

There's not much of John Bellairs left in the film version of his juvenile gothic thriller THE HOUSE WITH A CLOCK IN ITS WALLS. About 35 minutes in, a giant topiary chimera takes a huge shit into the garden pool — and that's when you realize that this first-ever adaptation of a Bellairs novel was directed by Eli Roth, the genuine, certified Sick Fuck behind HOSTEL, HOSTEL PART II and THE GREEN INFERNO: all of which worship at the alter of sadistic depravity, viscera and Beyond Graphic gore. With a resume like that, one has to wonder why in god's name Steven Spielberg hired the depraved Mr. Roth to direct a children's movie.

At first, the thing shows a sense of style: although the fantasy has been ramped up to the Nth degree, into gimmicky Harry Potter territory, the picture does have a smashingly stylish design. Well — that’s almost the only thing we can count on from Hollywood these days: that it will always look good. You don't begin to notice something wrong until Roth finds a way to make jokes at the expense of a crippled kid. That's offensive enough: but it isn't until we get to the Dumping Topiary that Roth begins to pile vulgarity on offense. And at that point, I was out. I'm too much a fan of John Bellairs to see his books treated in such shabby fashion by a man whose other movies present torture as entertainment. There's a special place in hell for Eli Roth, and now Mr. Spielberg is fully qualified to join him there.