(Unfortunately Not) The Last Jedi... and Others 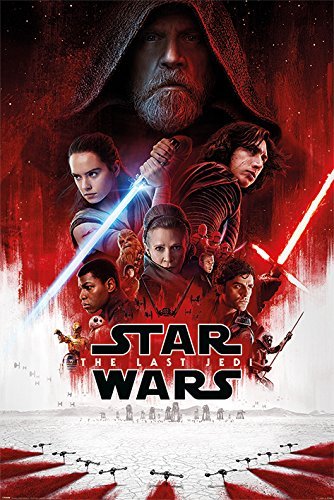 For a long while now, my so-called “reviews” of film and TV have been limited to spontaneous postings on my Facebook page, while those of books have been posted to my Goodreads library. While not full reviews in any sense of the word, occasionally I have typed something in those forums that succeeds in expressing what I felt about the subject. Even rarely, I type something that’s worth salvaging. Here, in no particular order, are some of those mini-reviews, although cleaned up a mite and hopefully improved to a point where someone might find them mildly useful, or suggestive of something, goodness knows what. There’ll be more of this sort of rubbish over the next few weeks.

In the sharply divided “love it or hate it” camps, which are largely but not exclusively defined by generation, put me down on the “hate” side for STAR WARS: THE LAST JEDI.

Wow. Where do I begin to sort out this monumental heap of stinking rubbish?
One has to hand it to director / screenwriter Rian Johnson, for it is No Mean Feat to make JJ Abrams look good by comparison. Perhaps that was why he was chosen to handle this Middle Chapter.

But here’s the thing: I’ve re-watched (or tried to) a bunch of them in recent months, and it has to be said that there have only ever been two good STAR WARS movies, three if you’re generous and count ROGUE ONE. So after all, it’s no surprise to rack up another stinker. What is a little bit surprising is that neither George Lucas nor the new team at Disney ever seem to learn from their mistakes. Especially with the new team, it’s not just that they have no real talent and are incapable of creating anything original: they have no BRAINS and are incapable of even creating a reasonable COPY.

Like much of what has gone before it, THE LAST JEDI is long and ponderous and boring and stupid and a painful waste of time.

I was there for the first STAR WARS. I will always remember its fun, its excitement, and most of all, its light-heartedness. It wasn’t trying to sell you anything, and it never took itself seriously. It was George Lucas’s homage to the great Saturday matinee serials, and nothing more. It was cotton candy. It lifted our hearts with its simplicity and sweetness.

That all changed with RETURN OF THE JEDI. By then, George Lucas had stuck his head so far up Joseph Campbell’s asshole that the only thing he could see was his own ego. He made the fatal mistake of taking himself seriously, and STAR WARS has never been the same since.

The Disney Company have spent millions and millions of dollars to create this zombie simulacrum that looks uncannily like one would expect STAR WARS to look like all these years later — but it has no soul, and worse than that, it has no heart.

As a side note: it’s obvious that Carrie Fisher was a sick woman when she filmed this. She looks fully ten years older than she actually was at the time of her death.

One doesn't exactly *enjoy* Ingmar Bergman's SAWDUST AND TINSEL (1953), unless one takes a perverse and sadistic joy in observing the very personal sufferings of Circus Folk. But there's no denying the exquisite beauty in its shabbiness, nor the way that it makes you feel the many levels of humiliation its characters experience. It's my second-favorite Bergman movie, after THE MAGICIAN.

It seems churlish to criticize a movie with so noble a cause as its subject, but SUFFRAGETTE wears its purple heart on its sleeve with a fringe of malice and force-fed righteousness. It is well beyond manipulative in the style fostered by Spielberg: not for nothing did they choose Carey Mulligan (whose innate qualities of sympathy made her such a vital part of “Blink,” one of the modern Doctor Who’s finest episodes), to endure in composite form all of the worst things that were collectively endured by the members of the movement. You expect to get the obligatory force-feeding scene and they do not "disappoint," playing it with spectacular ugliness. But it’s hard to trust anything in which all the women are presented as saints and all the men (barring one token character) as sinners. The film’s production design is so evocative as to make a viewer feel they have jumped back in time, but it's squandered by an incompetent director who drowns the picture in herky-jerky close-ups made with a deliberately shaky hand-held camera, trying to force either a sense of urgency or an upset stomach; it’s hard to say which. It's not a movie at all, but a polemic, and a cowardly one at that: for there are signs in place that point towards a much stronger ending that seems to have been sanitized for the sake of leaving the audience "feeling good." If that’s true, SUFFRAGETTE doesn't even have the courage of its own convictions.

What a marvelous pirate Walter Matthau would have made. Unfortunately, he chose to play one in Roman Polanski’s PIRATES, an insufferable display of one vulgar gross-out joke after another played out on one of the most beautiful set-pieces ever built for a movie. This set-piece is the pirate ship itself: and because it is beautiful Polanski does everything he can to avoid letting us get a good look at the thing, choosing instead to focus on Matthau’s one-legged double stumping around in feces and vomit and ultimately killing a live rat on screen, in close up, by stomping it with his peg leg. This is where I gave up. Sometimes, the nicest thing about movies in digital format is that you can simply throw the bad ones in the trash, where they belong, and purge your computer of their bits and bytes forever and ever.

For many and many a year I have wanted to see Cooper & Shoedsack's THE MOST DANGEROUS GAME, made in 1933 and shot on the same jungle sets and at the same time as their original classic, KING KONG. But time and movie rights were not kind to this film: for decades, the only available versions were lousy public-domain prints and computer-colored versions. Thank goodness the Mostly Good folks at The Critereon Collection have given it the release it deserves, beautifully restored in high-def and looking as if it could have been filmed yesterday, if only the people and the styles disn’t look so alien to the world we find ourselves stranded in today.

It is a very minor masterpiece, not a horror movie despite some undeniably horrific moments, but a delightful example of film noir that sometimes strays outside the tight boundaries of the genre into plain adventure. Everything about it is pitch-perfect. It is short, exciting, thrilling and frightening. The supposed insights into human nature are not very profound, but the picture accomplishes everything that it sets out to do -- and oh, that Fay Wray!