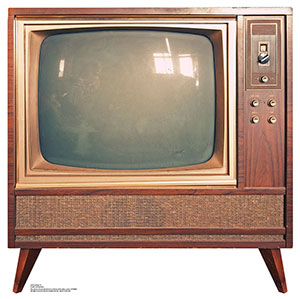 I was recently put off by something I read or saw or heard — nothing new there.

Was it a blog post, a YouTube video? A webmag article? A link sent to me by a friend? It doesn’t matter. The gist of is that some young dunderhead, someone almost literally Born Yesterday, made the declaration, somewhere on the interwebs, that “The Golden Age of Television” is — get this — happening right now.

Of course everyone living thinks that the Universe revolves around them, and the only time in history that matters is the present, because after all the present is where THEY live. These are the sort of people who go to Paris or London and take pictures of themselves.

So — the person who wrote the article likes the so-called “Television” that they are seeing in the Present Day, and that’s fine. But if you’re going to throw around phrases like “Golden Age,” you’d better have at least a moderate sense of history.

Television’s real Golden Age grew out of and overlapped the Golden Age of Radio. It began somewhere in the mid-fifties, when people like Walt Disney started treating TV as a First-Class medium, and began producing movie-quality programming specifically for television. If you want hard dates, I’ll give ‘em to you: The real “Golden Age of Television” began on December 15, 1954, the night Disney premiered the first episode of Davy Crockett — and it ended on February 26, 1983, with the airing of the final episode of M*A*S*H.

Of course there was good stuff before and after those dates. But to declare boundaries, you need a cultural phenomenon to hang the dates on, and those two series captured the attention of the nation as powerfully as anything ever has. They come as close as any to containing the complete history of TV’s first — and most “golden” — age.

It was the golden age of television because TV connected us. With just four networks to chose from, if we weren’t all watching the same thing, we at least knew what the neighbors were watching. As a culture, we were on the same page during the ‘60s and ’70s in a way that is no longer possible.

First the growth of dozens of alternative cable networks, then the expanding number of ways that television could be received, and finally the advent of the internet all gradually pushed us apart. It’s not just that we’re not all watching the same four shows anymore; with hundreds of stations and dozens of delivery systems it’s not even possible for us to be on the same page. If you think that the nation is more politically polarized than ever before, you’re right: and the reason for that is that Popular Culture as we knew it is dead.

Popular Culture once connected us. We live now in a word of personal culture, a culture not defined by reality or for that matter by anything outside of ourselves and our own preconceptions. We live in tiny personal bubbles of our own creation, bubbles that reflect and reinforce our own cultural preferences and prejudices.

If you define television as a unifying and connective force, then by definition its golden age CANNOT extend into an era where there are about a million channels to chose from, and no one can agree on anything at any given moment. The three-network system is what created and bounded not just TV’s golden age, but all of popular culture itself.

We absolutely have more viewing options than ever before (including the ability to re-visit classic TV in ways that were never possible at the time), and more systems to receive those options. I’m not even connected to broadcast TV anymore, because I don’t need it. I haven’t seen any current product of the old three-network system for going on three years, and I don’t miss it. I have plenty of other programming to watch. If you define a golden age by sheer volume and diversity, than I suppose the original writer who so pissed me off had a point. But that’s not how I define it.

The medium that once drew us all together, now drives us apart. There’s nothing “golden” about that.


www.tarotbyducksoup.com
Posted by Freder at 4:29 PM