Give Me My Bow of Burning Gold 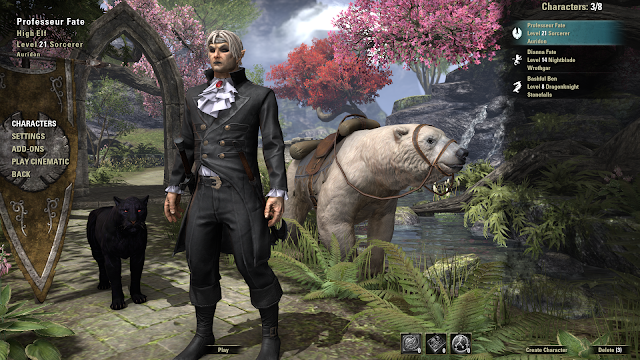 To paraphrase an old TV ad that was so ridiculous it became a long-lasting cultural joke, “I’m not a courageous, powerful, capable hero, but I play one in The Elder Scrolls Online.”

It’s helped me to realize an important truth about life: most of us really are just pretending to know what in the heck we’re doing.

When we’re children, our parents seem godlike creatures whose power and abilities stop just short of shaping the weather or determining the rising and setting of the sun. Even when we reach our teen years, they have a controlling say in our lives that sometimes causes resentment. That resentment can topple over into something more hurtful if we see our parents behaving in ways that we know they shouldn’t… and if we can see it, we ask ourselves, why can’t they?

Beings that powerful are supposed to be faultless. At the very least, they are supposed to know what they are doing. The realization that my parents were only human just seemed to deepen my anger, especially towards my father, who persisted in behaving in ways that brought damage and hurt to the family, and who seemed to be utterly indifferent to the impact that his actions had on my mother, and on the rest of us.

It wasn’t until I got considerably along into my fifties, and got there knowing that I was still inept, still awkward, still ignorant about such things as how to get along in my own life, that I was able to look back and think, Good God. Mom and Dad were a decade younger than I am now when they were blundering along cluelessly, focussing on their own problems to the detriment of their children’s lives, doing the things that slowly drove the family apart. Here I am, ten years older than they were at the time, and it’s all still a Mystery to me. I’m only (perhaps) just now beginning to grow up. A little. What must it have been like for them, when they were thirty years old with two kids and other stresses that I have never had to face?

I think: thank goodness I never had kids. I’d have been even more inept at parenting than my own Mom and Dad. My kids would hate me; and like as not I would spend much of my time staring uncomprehendingly at them as if they were Space Aliens.

Somewhere in the realm of adulting, you start to realize that you’re not the only insensible cretin in the world, and that everyone, just like you, is making it up as  they go along. Some more successfully than others, ’tis true, but then all people are not made equal.

Playing games is to some extent a way of reassuring ourselves that we’re not Completely Incompetent under the facade, that we can handle a challenge when it’s thrown down at us. Life does teach us in a roundabout way to expect drama and mystery; but when Drama arrives in real life, it’s never in the way that we’ve been led to imagine. It arrives when we aren’t looking and strikes down the towering pillars of our lives that we always assumed would be immutable and immune. Dragons and Devils, we know how to fight those things. Give us a Quest and we know what to do with it. But what of the losses that leave us standing alone in the night, without a weapon, without a windmill?