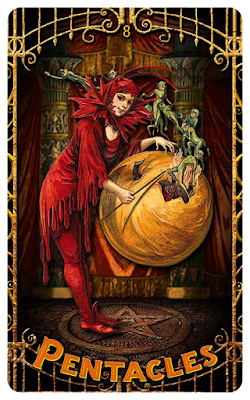 Today and for the next few days — possibly the next few weeks — I get to put my “designer” hat away and once again, after too long a time, pull my “writer” hat out of the closet, dust off the cobwebs, and so set  to work. The main task at hand is to generate enough Text Material to fill the companion book for my upcoming Trick Or Tarot Halloween-themed Tarot Deck; but I also mean to pull out a few blog posts, fill the next issue of my sort-of mystical rag The Sanctum, and perhaps, if I am lucky, plug away at the novel that has been my “main” writing project for considerably more than a decade.

Mind you, today I will not even approach any of those goals. Today I mean to start out easily, beginning here with a sort-of stream of consciousness recap of the various cultural stuffages that have passed before my eyeballs in recent months. Yes, this is the Self-Indulgent post. In fact, it’s so self-indulgent that it will likely get spread out across a number of installments. You have been warned. 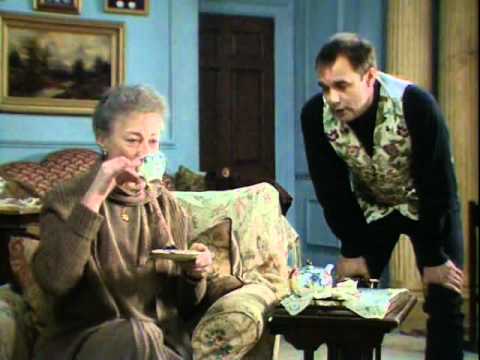 In January, facing a winter that had not yet turned as hard as it ultimately would, I at last finished viewing my DVD set of Mulberry, a lovely English dramady about a fledgling Grim Reaper who is sent to do a job — and finds that he cannot bear to go through with it. It’s one of my favorite series ever, fine and funny and wistful and sad, with a delightful cast of both characters and actors. And yet, much like Mulberry himself, I found that I could not bear to watch it for the longest time. Only 12 episodes were made… and yet it took me considerably longer than seven years to get through this viewing.

Grief will do this to you when the subject is death. And yet at the end of series 2, Mulberry’s intended “customer,” Miss Farnaby (the late, great Geraldine McEwan) is still very much alive. There was to have been a third series which the BBC never deigned to make; and now it is too late. Nearing at long last the end of the set, I wondered again just exactly how Mulberry would have ended, if the BBC had allowed it to have the planned ending. And so I hopped on the surfboard and did something that wouldn’t have been possible when the show originally aired: I found the answer on the interwebs, in the form an interview with one of the show’s late writers. It dissolved me into tears all over again. May it not have the same effect on you:

After all this time I’m glad to know the ending that the writers intended, but I guess I’m just as glad that it never got made. The story is complete on the etherial level, but in practical terms the folks in the big old Farnaby house still live on. And this way, I don’t have to say goodbye. I’ve said way too many goodbyes in recent years, and must face the prospect of more to come. Knowing that Mullberry and Miss Farnaby are still together, and can still be summoned up at will, is a minor consolation — but consolation all the same. 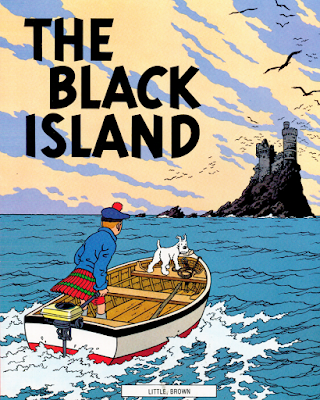 Since late last year I have been making a real effort, as implied above, to finally get through at least some of the mountainous accumulation of books, comics, movies and television that have piled up on my plate. Part of this effort involves getting a mechanic in place, a system that both allows me to make steady if slow progress, and insures that I will. I won’t bore you with the mechanics of my Reading Sandwich here, but one of the things that it’s helped me accomplish is an “At Long Last” reading of Hergé’s The Black Island.

If you thought seven-plus years was a long time to take watching twelve episodes of a half-hour TV series, go on ahead and try this on your piano: The Black Island is the first-ever Tintin adventure that I’ve read from beginning to end — and it took me more than forty years.

The copyright page on my copy of the book tells the story: it’s the First American Edition, published in 1975, which is the year I bought it. The ISBN number had not even been invented yet! In the years since I bought it, the book floated at the edges of my attention; once in a while I would pick it up to goggle at the artwork, but I never sat down to read it until it got fed into my Reading Sandwich late last year.

And now I understand why that happened: because these were originally created for serial publication in newspapers, Hergé’s pacing is rigid to the point of being pedantic. Every single half-page ends on a pause, a gag, or a minor cliffhanger, while every full page ends on a full stop, a major plot point, or a major cliffhanger. The adventure moves methodically from point A to to point Z with each page moving us along to another letter.

I know that Tintin is beloved all over the world… but for me It’s all very charming without ever fully engaging my heart (in the way that, for example, Mulberry absolutely does). Barring only Snowy, the characters are cyphers defined more by what we bring to them than by what Hergé imbued them with (this is a subject I really hope to explore in greater depth over the next few posts).

It’s not the story or the characters that engage us, but the antiseptic charm of the illustrations. Hergé draws like God Himself. Is there anyone else in the business who combines such an eye for detail with such a clean, assured line? It’s that assurance and the rich atmosphere of Herge’s world that carries us along from page to page. Far from being concerned about what might happen to Our Heroes Tintin and Snowy, I found myself constantly thinking, “Ohmigosh, look at that Island! It’s gorgeous! Look at that house! Look at that castle! Look at that airplane! Just freakin’ gorgeous!” The cover is a great example of how the style drives our attraction to the thing. I defy anyone to look at it and not think, “Wow, this looks really promising!” No wonder I bought the damn thing all those years ago! … and really, no wonder it’s taken me this long to read it — but I’m glad that I finally did.

There, you see? Over a thousand words of drivel and I’ve barely begun. Don’t you wish I’d never taken off my designer hat?

Speaking of which, my Halloween Tarot mentioned above is currently funding at Kickstarter. Why not give it a gander and see if it’s something you’d like? Here’s the link: https://www.kickstarter.com/projects/1911920092/trick-or-tarot-the-oracle-for-halloween-and-beyond


www.tarotbyducksoup.com
Posted by Freder at 3:36 PM