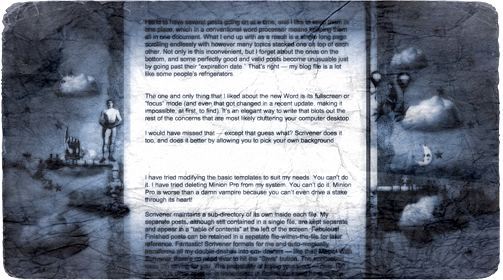 Word Processor.  What an ugly, sterile name for a writing implement! That’s what you get when those damned right-brainy, businessy types of people are given all the power to decide the names of things. Why not call them “Writing Engines” or “Thought Transmogrifiers” or “Dream Aspirators” or something cool like that? Even the Latin Verbum Processus would be better. Let’s make it a rule right here that only creative people get to make up the names of things from now on. That change alone would make the world a much more interesting place. Instead of going to the movies, we could go to Cinematograph Exhibitions. Instead of Frozen Food we could enjoy a Cryogenically Preserved Repast.

Whatever you want to call the things, I very nearly dropped twenty dollars on yet another Writing Tool yesterday afternoon, and although the twenty dollars would not have broken the bank, it was money that could buy more pleasing things (a few weeks back I scored fourteen-plus hours of Baroque music for a measly ninety-nine cents. I’m just sayin’). The new software had one feature in particular that I thought would be terrifically useable when it comes to writing this blog: unlike old-school Document Construction Machines, Ulysses III works with what they call a “single library.” More on that later. Fortunately, I caught myself before hitting the “Buy” button, and eventually the coin dropped in my head: I don’t need it. Boom! Twenty bucks saved, and all I have to do is rethink how I use the tools I already own.

Here’s the thing: Microsoft Word used to be the only writing tool that anyone could ever need. But in their drive to be the best, to constantly update, modify, add on and elaborate Word with new and different (generally annoying) features — or to simply mess about, rename and re-arrange the features that it already has —  the only thing Microsoft has succeeded in doing is to turn Word into a bloated, completely unusable dinosaur. An expensive bloated unusable dinosaur.

I actively hate Word now. In its desire to be all things to all people it has become the opposite of an enabler. It’s an impeder. When you’re actually fighting with your tools, you aren’t getting any work done. This is what was happening to me.

Just as the smallest example, let’s discuss Minion Pro. This is a font that I never installed into my system and never would install. Next to Helvetica, it’s the ugliest font devised by man. It pisses me off. And yet, in Word, I can’t get rid of the bloody thing. I have tried modifying the templates. I have tried removing it from my system. You can’t do it. It’s there to stay, there to haunt you forever with its ugliness. Minion Pro is worse than a damn vampire because you can’t even drive a stake through its heart! And so, every time I create a new Word document, the first thing that I have to do is put my thoughts on hold and change the whole layout of the document to something I can use. By the time I get a chance to write I’ve forgotten what it was I wanted to write about.

And that’s just one thing. Multiply it by a thousand; that’s how irritating Word has become.

I get down on my knees and thank his holiness Uncle Billy Faulkner for the day that I finally trusted my instincts and, for a measly $40 (Word is more like $200), bought Scrivener. It has been a blessing in so many ways. It was designed not by a computer geek but by an actual Writer. It’s not only more useable than Word, it’s actually helpful. My only problem is that I wasn’t using it enough.

For a while now I’ve settled on writing all my fiction in Scrivener and all of my blog posts in Apple’s Pages. This worked well, up to a point. Pages is a good basic Prose Generator that is very easy to pick up and use, with no muss or fuss. Mainly, it allowed me to cut and paste each post into the blog template without having to do a lot of reformatting. Would Word do that simple thing? Are you kidding me?

The one and only thing that I liked about the new Word was its fullscreen or “focus” mode (and even that got changed in a recent update, making it impossible, at first, to find). It’s an elegant way to write that blots out the rest of the concerns that are most likely cluttering your computer desktop.

I would have missed that — except that guess what? Scrivener does it too, and does it better.

Scrivener was a hard sell. It looked too New-Agey for me. It looked a bit like… how should I put this? It looked a bit like one of those things that you sell to people who want to be writers. Like Dramatica (a piece of snake-oil software if I ever saw one). Instead, it really does turn out to be the greatest thing since sliced bread, and something that opens out, creating more possibilities the more I use it. I can no longer even imagine writing a novel in Word. I’ll never go back. It would be like using a popcorn popper to make ice cream.

But when it came to writing the blog, I had it in my head that Scrivener was overkill. Blogging is down and dirty writing; these “Swiss Army Knife” apps offer bloggers a lot of overkill. Or so I thought. That was why I forced myself to use Pages.

But — I tend to have several posts going on at a time, and I like to keep them in one place, which in a conventional word processor means keeping them all in one document. What I end up with as a result is a single long page scrolling endlessly with however many topics stacked one on top of each other. Not only is this inconvenient, but I forget about the posts that find their way to the bottom, where they gather dust and mold and start to smell. Some perfectly good and valid posts become crud just by going past their “expiration date.” That’s right — my blog file is a lot like some people’s refrigerators.

Ulysses III, which I almost bought yesterday, has its roots in mobile app development, and offers a different level of organization called a single library which keeps all your documents separate but equal in one location. Like email. “a brand-new writers’ environment,” as they call it. No more scattering of individual texts around your hard drive. “A single library that holds every piece of content… letters, notes, blog posts or a series of best-selling novels – it’s all there, just a click away.” Genius.

Except that I came to my senses and realized that I could “just use Scrivener to write your blog posts, dummy!” It was my “DUH” moment for the day. It took maybe ten minutes to copy my blog file into Scrivener, break it down and arrange it into a cohesive library. My individual posts, although contained in a single “clickable” file, are kept apart from one another and appear in a “table of contents” at the left of the screen. Genius! Finished posts can be retained in a separate file-within-the-file for later reference. Fantastic!

Plus, Scrivener formats for me and auto-magically transforms all my double-dashes into em-dashes — like that. Magic! With Scrivener there’s no need ever to hit the “Save” button. The application does the saving for me. The probability of losing my work — near 100 percent in other apps — is nonexistent in Scrivener. Try getting that from Microsoft Word! Lawd have mercy! It’s a freakin’ miracle!

It’s the old, old David and Goliath song. Microsoft has turned into IBM — too big and too established for its own good. Adobe, are you listening? You’re next. Photoshop is starting to get the crap kicked out of it by an array of smaller, cheaper apps. Unless the software giants of today change their mindset and start making their products useful instead of adding on a widget here and a doohickey there until the whole thing collapses under its own weight, they are doomed to extinction.

Now if you'll excuse me, it’s off to fire up my Dream Aspirator of choice to work on my next novel…