Will the Real Audrey Tautou Please Stand Up 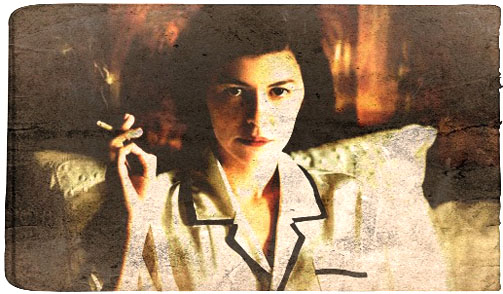 I gave myself the night off and watched a movie. This hasn’t happened in a while; I used to watch a new film at least once a week, but I’ve been so focussed on Making Books lately that this has gone by the board. Meanwhile, the DVDs pile up — because I am compulsive and can’t resist the things when they throw themselves in my path. I have a backlog of Jimmy Stewart and Cagney and Bette Davis and others that amounts to the best sort of problem a movie fan could possibly hope for. My credit card is beginning not to like me very much, but I get around that problem by not thinking about it. Ignoring things is my preferred method for making them Go Away. Once in a while it works. It seems that I inherited more from my mother than just a creative spirit and a houseful of her artifacts.

So — for last night, the plotting and planning of my next move was put aside, and I settled in to the French countryside for Coco Before Chanel. Audrey Tautou stars as the woman who needed to be exactly what she was to accomplish all that she did in an age when women were emphatically not entrepreneurs. It’s a grand, deeply felt performance that would certainly be Oscar-worthy if Hollywood wasn’t so busy dismissing Tautou as just another pretty face.

I confess that Tautou is the only reason I focussed on this movie in the first place; I wouldn’t go so far as to say that I’ve got a crush on her or anything like that — but who in their right mind would take their eyes off of a face as naturally and deeply expressive as hers? In case anyone wrote Audrey Tautou off as being just a bit of Silly Putty in the sly, precisely controlling hands of Jean-Pierre Juenet, here is proof that she is one of an elite breed of actor: the kind who can physically alter their appearance from part to part, chameleon-like, so that while the logical part of your brain registers that this is, must be, the same woman who played Amelie Poulain and Mathilde Donnay in A Very Long Engagement, your eyes and heart tell you otherwise.

For Coco Chanel, Tautou seems to have dropped a significant amount of weight and broken out in hair and eyebrows. All the softness is gone from her face and nearly all of it is gone from her eyes. Tautou’s Coco Chanel is an ironclad icebreaker cutting through waters so frozen up that no other woman of her age would even attempt to navigate them. She sails almost blindly at first, not knowing her destination but assured that she has one, somewhere; she only needs to find it and then shovel the coal onto the fire like mad.

The film doesn’t gloss over Coco Chanel’s mercenary nature, but it does suggest that she came by it honestly, almost superhumanly focussed on her own self-determination and willing to do Whatever It Takes to meet her destiny. It creates a world so sensual that sex is just another thing, like eating, drinking and singing. I don’t know if other people react the same way to this sort of a movie as I do, but when I’m confronted with a movie this epicurean I come away with my senses so heightened that every little movement, every sound, every breath becomes magnified and intense, demanding near-silence for hours afterward. You begin to perceive the world around you with eyes and ears that seem freshly wakened from a deep sleep filled with vivid dreams.

That’s what Coco Before Chanel is like: living inside a dreamy painting that’s propelled by a being who is half shark and half butterfly.

I wish I could let it go at that, but the MPAA, in their infinite wisdom, has given this film a PG-13 rating and I can’t understand why. It deserves a PG at most. True, it does have sexuality as a specific theme; but that sexuality is presented frankly as a vital and natural aspect of adult life. There’s no nudity, no foul language, no violence, and y’know… anyone Not Old Enough to be thinking about these things is likely to be bored to death by this movie. I’ve seen things in PG and even G-rated movies, and also lately on Broadcast TV, that made my teeth curl, things that 13-and-under types are deemed ready to see, and yet this sensible movie about the role that sex plays in adult life is for some reason ruled off-limits. Once again, the MPAA demonstrates its idiotic mindset that wild extremes of violence are perfectly OK for kids to see, but, oh, whisper about sex and forget it — we can’t pollute Junior’s mind with the anarchistic notion that sex might be a perfectly natural thing with uses that go beyond procreation.

I can’t believe that America is the Land of Idiots. But too many of the people who have their hands on the reins are dunderheads of the highest order. How does that happen?