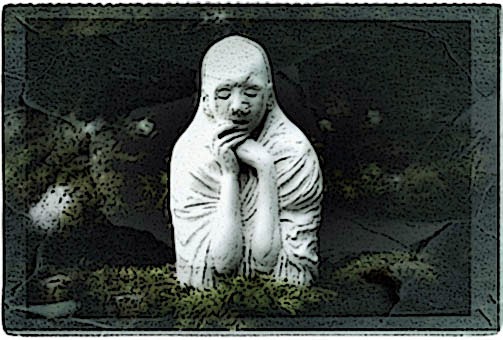 Last year I posted the details of my Halloween Music playlist for 2012 (“Shake, Shiver, Rattle, Roll Dem Bones”). Always in favor of Establishing Traditions, I created a new playlist of Halloween Music for this year.

The thing is, radio stations are pretty woeful this time of year. So unimaginative. If you’re lucky they might play “The Monster Mash” a time or two — and usually when they do, they play the wrong version, a knock-off by some no-name band, not the original by Bobby “Boris” Pickett and The Crypt Kickers.

I’ve nothing at-all against “The Monster Mash,” but there’s so much good music for Halloween out there that you wonder how radio programmers can be so bloody lame.

Herewith as a public service is my list of Halloweenish cuts for this year. It all fits on one disk. Take it away, Yanush…

#1) I always try for an arresting opening. Someone took one of the few extant recordings of Alastair Crowley reciting an invocation of some sort and put some atmospheric, eerie music behind it. Crowley was once “The Wickedest Man in The World;” now, I fear, his wickedness has been far outstripped by other Human Monsters. The cut is called simply “666” and it’s almost as if the wicked old bastard (who made a wonderful tarot deck once upon a time) is greeting us and consecrating what follows. Welcome into the lair…

#2) “Consider This: The True Meaning of Love (Instrumental Version),” by Sopor Aeternus & The Ensemble of Shadows. Sopor is the brainchild of Anna-Varney Cantodea, a German performance artist who certainly qualifies as one of “my people.” He — I mean she — I mean it — would certainly be right at home hanging from The Addams Family Tree. That’s her in the picture above… NOT a statue of her. Very talented musically, but O My Goodnitz you don’t get much darker. “Consider This” is a striking Gothic anthem that whirrs and lumbers like an arcane machine. A swell opening for a Nightmare Party.

#3) My cut number three is not a song at all, but a very brief and efficient “Introduction to Horror” by Arch Obler, from his record album Drop Dead. Obler was the diseased mastermind behind the great Old-Time Radio show Lights Out, a genius of manipulating sound and voice to produce a specific effect. In this piece, Obler quickly demonstrates that the old tried and true ways are often the best…

#4) “Halloween Spooks,” a really lively jazz cut by the vocalise trio Lambert, Hendricks and Ross. This was a great find. It’s available on several albums, including a comprehensive collection of their bright and crisp works. This is their only remotely Halloweenish song, a charming wink and nod to The October Country.

#5) Speaking of The Addams Family, did you know that Ted Cassidy, who was all over ‘60s TV (he lent his voice to many a Hanna-Barbera cartoon) and notably played Lurch, the Addams Family butler on the original series, actually issued a record right around that time? “The Lurch” is a hysterical parody of dance songs from that period, with Cassidy providing “vocal interjections” in character as Lurch. Cassidy died young, and was buried in the backyard of his California home. His family subsequently moved away… so some unsuspecting homeowner out there actually has Lurch buried in their back yard!

#6) I “discovered” The Birthday Massacre last year and was immediately taken with their eerie brand of hard rock and sensitive vocals. Got to have one of their cuts in any Halloween playlist… this year, I selected “Shallow Grave,” from their album Pins and Needles. “She wears her dress like a body bag every day…”

#7) Jazz great Artie Shaw is next in line with his wonderful seasonal cut of “Nightmare,” a terrific piece that lumbers along like a steam-powered Ghost Train.

#8) When, in the early '30s, Universal Pictures was just beginning their cycle of Monster Movies and the art of movie scoring was unsophisticated to say the least, they used a version of “Swan Lake” as a kind of a generic mysterioso theme for at least a couple of their pictures… especially including The Mummy. Any version will do; mine is by the London Symphony Orchestra.

#9) Walter Disney’s (as distinct from the evil corporate entity that now bears his name) animated version of “The Legend of Sleepy Hollow” scared the crap out of me as a little kid. A musical highlight of the short is “The Headless Horseman,” sung in the picture by Bing Crosby. It was re-recorded for Disneyland Records in the sixties, performed by Thurl Ravenscroft, he of the basso profundo who sang for us “You’re a Mean One, Mister Grinch,” and also voiced Tony the Tiger! I have owned this single ever since I was about five years old! It's a terrific, atmospheric tribute to the season.

The LA duo billing itself as “Creature Feature,” put out a terrifically fun monster-themed rock album called “The Greatest Show Unearthed” a while back. Their song “A Gorey Demise,” inspired by Edward Gorey’s wonderfully sinister book The Gashleycrumb Tinies holds down the middle of the selection at song number ten.

#11) A group that I know nothing about and have not researched called Reliquary is up next with a cut from the gothic music collection Dark Moments called “Dreams Torn Away.”

#12) No Halloween selection would be complete without an offering from Gothic Diva Jill Tracy. This year, I chose “The Fine Art of Poisoning,” from her honky-tonk horror album Diabolical Streak.

#13) Next up, the horror soundscape group Midnight Syndicate welcomes us to the Carnival Arcane with the first cut from that album, “Mesonoxian Visitors.”

#14) Brit Pagan Rockers Inkubus Sukkubus are up next with their fine blood-pumper, “Pagan Born.” To a certain extent nearly all of the music that this produced pretty much sounds alike, so I could have selected almost any one for this spot. They do what they do very well, but they don't do anything else...

#15) I needed a dash of Classical right about this time, so the London Philharmonic kindly stepped in with their performance of the Spooky Standard, “Carmina Burana: O Fortuna.”

#16) A three-member eccentric Australian band, Brillig next puts a smile on our faces and a dark light up in our soul with “Absinthe Makes the Heart Grow Fonder.”

#17) Jazz legend Cab Calloway could be super-creepy when he wanted, and recorded a number of spooktacular songs. This year he joins us with “The Ghost of Smoky Joe.”

#18) Everyone’s pal Boris Karloff joins us next with one of his Tales of the Frightened… this time featuring a story about a man who tries to run from death — with predictable results.

#19) Ever since Garrison Keillor introduced me to the concept that a melancholy rag made excellent, unconventional Halloween Music, I have included rags in all my seasonal listening. This year I selected Scott Joplin’s “Solace,” made famous as one of the tunes Marvin Hamlisch adapted for use in The Sting. My version is performed by William Albright.

#20) Didja know that the Joker of Jazz, Spike Jones, put out an entire Halloween-Monster-themed album? It’s called Spike Jones in H-Fi, and for my penultimate cut I chose the opening track from that album… a genuine groaner in music, Spike’s version (with Paul Frees, the voice of Boris Badinov on vocals) of “I Only Have Eyes for You.”

#21) … and I close out this year’s affair with a skin-crawly number from another German Goth group, actually a duo and actually now defunct (which seems appropriate enough) called In My Rosary. "Day Fly" will pulse you out the door… but be sure to stay for your own burial at the end of the song!

That’s my 2013 Halloween Playlist. What’s on yours?