That Time of Year 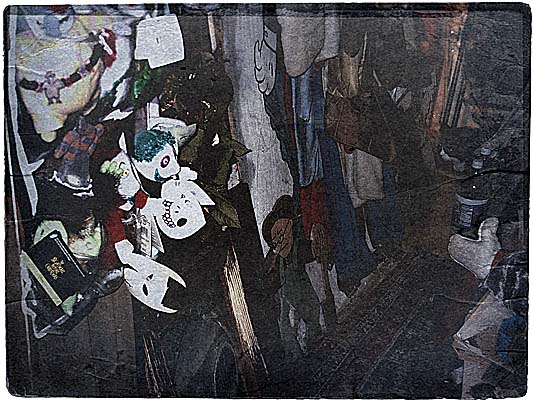 My mother’s birthday is coming up tomorrow. Two weeks later, she was dead. I have a hard time believing that it’s been three years, even though an awful lot has happened in that time. In the end, I’ve given myself permission to not allow my grief to rule me any longer; but you never forget, and the world will never be the same.

This morning I made my annual visit to the local greenhouse. I’m improving the gardens around my house on an extremely gradual basis: this year I’m going to plant another section of the back garden in perennials. I’d hoped to move the the daylillies outside my study down there, too, replacing them with forsythia up by the house, but I can’t do anything until those daylillies start to appear, and so far they are being stubborn.

I was startled when I arrived at the place and discovered one of my mother’s old plywood cow lawn ornaments on display outside the greenhouse. They stand about four and a half feet tall and are hand-made, so they are quite unique and easily identifiable. There was no mistaking this. Last seen (by me) three years ago in the small barn out at the old house, there were several of these plywood cows along with some plywood-and-papier-mache sheep. At least one of the cows and one of the sheep ended up with my lawyer, because I gave them to her; of the rest, I had no idea what became of them.

I really don’t care, either way.

I thought of my mother’s whole collection or artifacts, thrown to the winds, spread out far and wide… for me, it’s the same as her ashes. It’s… okay knowing that little bits and pieces of Mom are out there, cast to the four corners so to speak, enriching other people’s lives in small ways.

Once I got over the shock (and it was a shock), I was able to look at the piece and think to myself: “Hey, Mom. How’re you doin? It’s good to see you. I miss you.”

On the way out there, I stopped to turn in more than six month’s worth of bottles. I used to be embarrassed to turn bottles in for redemption, not that simple embarrassment had the power to make me stop drinking, because fifty to seventy-five percent of those things would be vodka bottles. They pile up pretty fast when you’re draining between four and five of those big double-sized bottles a week.

This time? A lot more time has passed between visits to the bottle redemption place, they just aren’t accumulating the way that they used to. And buried way down there, way down in the bottom of the oldest garbage sack, in the midst of a couple hundred soda bottles, there were three vodka bottles.

I thought that was bad enough.

It was just about this time last year that the shit was really starting to hit the fan for me as an alcoholic. I would go to work with however many drinks in me, because it was the only way I could face spending my days in that Concentration Camp, working for That Bitch, that Misfit from out of an H.P. Lovecraft novel who called herself my boss; I’d do my time, then come home and start drinking right away, keep it up until I was asleep, then get up and do I all over again.

Life is so much better now.

I feel guilty about that.