Of Pigs and Seeds 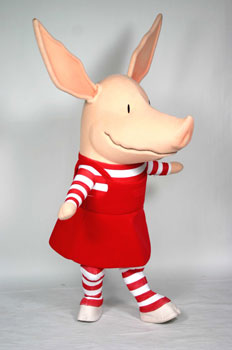 Today was our annual Kid's Character Event at the bookstore, this year featuring Olivia. There is always, always a lot of anxiety for me surrounding this thing: even though we have it down to a science, and one just has to color between the lines to make it happen, still, it's an event that brings several hundreds of people through the store, and the responsibility for making it happen is 100 percent mine.

So, the words that would describe me in the couple of weeks leading up this thing are:

and that's in a GOOD year.

And this was not a good year, oh no. I've been deathly ill, and in the past week I've been metaphorically worked over by my boss with a rubber hose for a crime that I did not know I was committing at the time (although I did commit it), had the police in my living room giving me the third degree until three AM, AND been ordered back into mandatory counseling!

Well, it came and it went and everything turned out OK, although only thanks to a few last-minute heroes who stepped up to the plate to save me. As it turns out, even though the tickets were not flying out the door in the weeks prior to the event, this year it was HUGE, with at least a third more people in attendance than in the past two years. I ran out of cups for lemonade. I ran out of balloons. I sold out of Olivia dolls (at sixteen bucks a pop) within the first thirty-five minutes.

I wished that my boss was there, not just to see how well-recieved Olivia was, but because she is a steadier and calmer hand on the controls than I am, and she might have been able to smooth out some wrinkles.

Because -- it was REALLY BUSY. Not since Clifford the Big Red Dog stopped by the store four years ago have we drawn a crowd like the one we drew today.

Even if I had been feeling well, I'd be tired right now. As it is, soon as I finish typing this I am headed for the couch and a Nice Relaxing Evening that will most likely feature easily prepared frozen food at dinnertime.

Here's one nice thing: I stopped by the stupormarket on the way home, for quat fud and other necessities, and guess what? The seeds were out! It always really cheers me up when the garden seeds appear in the late winter, early spring. It proves to me that Spring is coming. I bought my first two packages of Nasturtium seeds, and it -- along with the simple fact of having the annual Character Event squarely behind me -- really cheered me up!

Email ThisBlogThis!Share to TwitterShare to FacebookShare to Pinterest
Labels: books, gardening, on the job