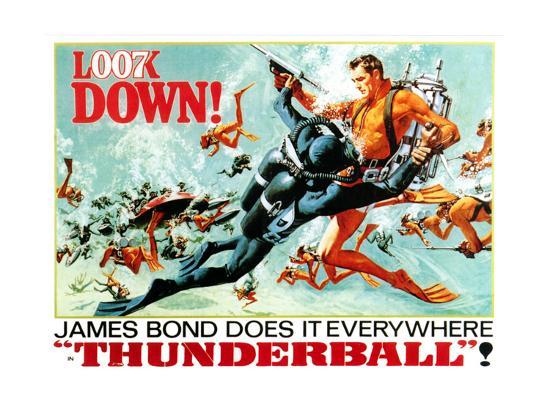 It's High Summer in Maine, and I have installed the air conditioner in my bedroom to prove it. Likewise, I've been indulging in the sort of films that feel appropriate to the season... that is, Low Entertainment: on the one hand taking the form of the early Bond films (because I just picked up the whole set, newly restored and remastered on Blu-Ray, and the obsessive Asperger's gene in me is forcing me to watch them all) and on the other hand in the form of Giant Japanese Rubber-Suit monsters (because somehow I landed on the first GAMERA movie from the mid-60's and found it so insanely entertaining in the most off-beat way that I felt compelled to track down all the early GAMERAs and the early GODZILLAs as well -- more on that "discovery another time).

THUNDERBALL has the best opening sequence of any of the Connery Bonds, and it still holds up today. I'll wrestle to the ground anyone who disagrees. But the rest of the movie is a bit slow and stately by today's standards, and in some ways (sexism, anyone?) the picture has aged more in the last decade than in the 40 years prior.

It is my third favorite of the Connery Bonds, after FROM RUSSIA WITH LOVE and YOU ONLY LIVE TWICE. Despite all . the years and all the pictures that followed it, RUSSIA still holds its own as the best picture of the whole series: because without it, there never would have been a series.

Once again, the HD restoration from the original camera materials is the star of the Blu-Ray release: it just looks so unbelievably fresh and gorgeous. You see what the camera saw, including details in the costumes and settings and even the actors' skin that have always been unnoticeable until now. It almost has the effect of putting you in the same room with Bond, and that's the closest thing to Time Travel that I've seen in my lifetime. Just stunning.

Now, about the "Bree" in the title up there.

You might ask how I can watch the Bond movies without complaining about Bond's rough and undeniably chauvanistic character, attitude and bearing when I so vocally hated Bree Larson's arrogance and smug demeanor in [NOT MY] CAPTAIN MARVEL. At least, I asked MYSELF that question: and the answer came without a moments hesitation:

It's because JAMES BOND IS NOT A HERO. I don't think anyone would argue that point with me: not even Ian Fleming, who called Bond "a blunt instrument in the hands of the government." If Bond sometimes finds himself in the position of saving the world, it's really of no concern to him. It's Just Another Mission: and (especially with Connery playing him) he tackles it with the same brutish efficiency that he would bering to bear if he were ordered to kill the child who would grow up to be Hitler.

CAPTAIN MARVEL is supposed to be a HERO. We expect more from a hero: including humility, good intentions and kindness. These are qualities that Bree Larson is utterly lacking, at least insofar as her approach to this character goes. Compare Bree Larson's CM not to Bond, but to Christopher Reeve's turn as Superman. There is no comparison. Larson comes off looking like a jack-booted thug, like James Bond in drag minus the sex drive.

THIS is supposed to be a hero? Not in my universe, me buckos.