What's In The Cards? You. You Are. 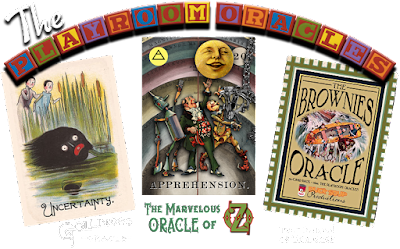 Since I began publishing THE PLAYROOM ORACLES — The Marvelous Oracle of Oz, The Brownies: Their Oracle and The Arthur Rackham Oracle — folks have been asking directly and indirectly for some kind of companion text that clearly defines the card meanings. I am against this, not just because writing that kind of text is a tedious and thankless job, but because it deprives the reader of participating actively in the oracle as an equal partner.

People are always asking writers “What did you mean by that?” Usually, the answer is “I meant what I typed and I typed what I meant” — but sometimes writers, just as any other kind of artist, do use symbols and metaphors. I always refuse to answer these questions, not out of any mysterious motive, but because I want the readers to find the meaning for themselves.

A writer can produce a novel and that’s all well and good — but a novel is just another “thing” until a reader invests their own experience and creativity to bring it to life in their imagination. In a very real sense, a novel isn’t “completed” until read, a painting isn’t finished until it is observed, and an oracle deck isn’t functional until it is used. The reader or observer is a collaborator in the creative experience. Naturally, a well-read, substantive person will bring more to the experience than a shallow person who has never seen the inside of a museum or read a book for pleasure. It is your responsibility as a living being to expand and deepen your knowledge and experience — and Tarot is here to help you with that.

It’s true that symbols (such as letters, numbers, and the triangular symbols used to represent the four elements of earth, air, fire and water) do have specific meanings that you can look up in a book. Metaphors are another thing entirely, and when the two combine or collide (as they often do in Tarot), they are meant to connect with that part of your unconscious self that still has access to the great unknown, to that which our conscious minds cannot normally perceive.

So you can learn “canned” meanings out of a book, but still be hopeless as a reader, because you will miss what the cards are really trying to tell you — YOU, as an INDIVIDUAL, having drawn a combination of cards (symbols and metaphors) bearing upon your specific circumstance.

When there are symbols present, you need to learn about those symbols in the same way and for the same reason that you need to learn the alphabet before you can hope to read a sentence, let alone a book. But when there are metaphors present, you need to be able to connect with your instinct and with the collective unconscious. Relying on “canned” meanings deprives you of your ability to become an active, creative participant in any deck, in the same way that Cliff’s notes tell you what to think and feel about a novel when you are too lazy to read it for yourself.

This is why I don’t provide “official meanings” for my oracle decks, or set boundaries around the card meanings by defining them beyond what is printed on the cards themselves. To do so would be to circumscribe the experience. I’m looking for collaborators, not minions.