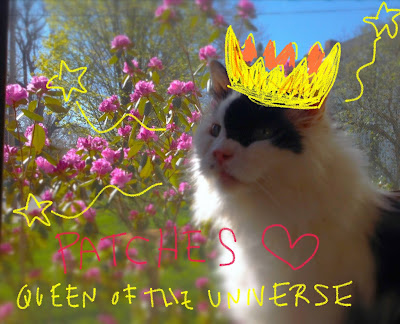 Patches was at least sixteen years old and probably closer to eighteen. That’s not just a long life for a cat: it’s a serious chunk of time out a human life.

Patches is gone now. She traveled with me in three completely separate and distinct Worlds, none of which would have been the same without her.

She was the Queen of the Universe, and she knew it. She was the only pussyquat I know of who had her own anthem. I sang it to her for the last time on Monday.

Back in the day, out at the Old House, we had as many twenty cats in the house, and thirty or more living outdoors. So — I’ve had cats all my life, and I loved them all to one degree or another, but Patches was the first cat I ever really feel in love with.

She was part of the most beautiful litter of kittens that you ever saw. Four puff balls of gorgeousness. Her brothers and sisters were nominally more gorgeous than she was, but Patches had all the personality. She was born outdoors to a mother who was a completely feral cat, and who took her litter off on Hunting Lessons well before they were really old enough to think about that crap. One afternoon, everyone came back from a hunting trip in the back field — except Patches. We looked for her, we called her and called her. When, at least an hour behind, she came struggling gamely back through the tall grass… that was when we said, “Never again — you’re coming into the house.”

Her markings made a perfect solid lightning-bolt zig-zag down the sides of her body. She had the softest fur of any pussycat I’ve ever known. While she was young, I hugged on her all the time and told her how beautiful she was… and she agreed. Then when she hit the pussyquat equivalent of her teens, all of a sudden I was an embarrassment to her and she didn’t want any more affection. She even hissed at me! “Get away from me! You’re embarrassing me, dad!”

For maybe five years or more she and I weren’t all that close. Once in a while she might creep into my lap for a bit, which came as a shock — but mostly she was aloof, living up to her title, and I guess I resented it because after all, what did I ever do to her but love her? Plus, I had other things on my mind. Mom’s health started to fail. Over a period of about three or four years, Mom had two bypass operations in her legs. After long recoveries she would still be able to get around, with difficulty, but things were starting to go south.

It was just after Mom’s right leg was amputated that something strange happened with Patches. I’d go into my Mom’s bedroom at night just to make sure that she had made it into the bed all right — always a worry in those days — and Mom would say. “Look who’s here.”

And there was Patches, sitting in a corner of the bed, looking up at me with big alert eyes as if to say, “Don’t worry, I’ve got this covered.”

She started going to bed with Mom every night. She had never done this before. She knew Mom was sick, and she was keeping an eye on her. After a while, she didn’t just stay in her corner of the bed, but went up and snuggled up against Mom real close, even crawling under the blankets with her. Mom was just as surprised by this as me.

For five years, Patches watched over Mom every night. When Mom died, Patches didn’t know what to do with herself. She stayed in Mom’s bedroom for a while; then she never, to my knowledge, went back in.

By then, my Little Honey — the only other cat I’ve ever loved so much that it hurts — had come in and taken up residence with me upstairs in the far end of the house. The Upstairs was Honey’s domain and she protected it fiercely. At night, Patches used to come to the bottom of the stairs and stare up at me longingly, looking terribly lonesome. But she didn’t dare come up. She knew Honey would just kick her out.

When we moved into the All-New, All-Different Duckhaus — Patches, Honey, Whitey, Pandy Bear, Pooky and me, suddenly it was all new turf and no one had any special claim on any territory, all bets were off. Patches came up to sleep with me every night and so began the pussyquat Power Struggle between her and Honey that continued right up until this week. And I must say, by force of will, Patches won out more often than not. I wanted both of them to coexist, but this really only happened after Patches had fallen asleep or when she was in a rare tolerant mood.

Especially in the last couple of years, Patches made it her job to keep track of me. She would be watching from the living room when I went up to bed. She’d come zooming up behind me, fly onto the bed and then sit there looking at me as if to say, “Here I am! Pet me! Tell me how beautiful I am like you always did when I was a little girl!”

Every single night, as soon as I got into the bed — without fail, Every. Single. Night. — Patches would jump onto my chest and shove her face into my face. Literally, she would stand on my chest demanding attention. I’d say, “Oh yes, we have to do this every night, don’t we?” She had to hug me and I had to pet her and kiss her and tell her how pretty she was. Sometimes she would settle down half on my chest and half on my shoulder while I ATTEMPTED to read something (it’s hard to read with a cat practically sitting on your head).

When I turned out the light, she’d paw at the covers until I lifted them up, so that she could crawl in and curl up right against my face. She’d stay there just until I fell asleep. Then with me snoring away, she would settle down in the left corner at the head of the bed, where she could look out of her favorite window, with its commanding, Queen-like view of the neighborhood and the street below. 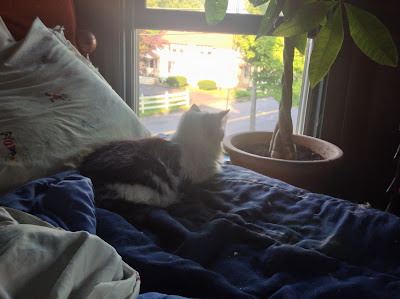 She’d done her job of caring for me, and all was well in her Universe.

Good-night my little Queen of the Universe, my beautiful and loving Patchyquat.

She took care of me when the world was falling apart. I know that I will never forget her, nor ever stop missing her. Another piece of my heart has been carved away.
Posted by Freder at 12:55 PM