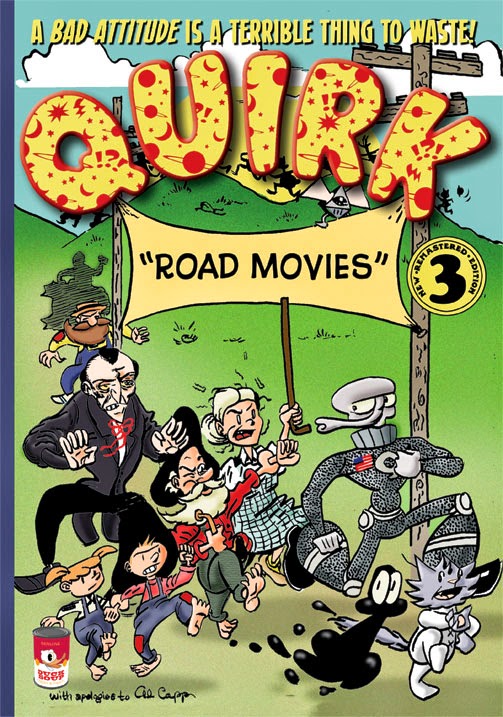 Stan Lee was such a big influence on me in my formative years that whenever I make an announcement like this the difficulty becomes not falling into a whole bunch of Stan Lee-isms. Item! Face Front, True Believers! Our Merry Misfits from Space are touching down again this fall in a Wild new...

Fact is, though, Quirk vol. 3 is coming this fall, and there are several reasons why this edition is special.

First, it contains the final year of continuity from the original Quirk webcomic.

Second, it contains a special story guest-written by Bruce Canwell -- Bruce is not just one of the geniuses behind IDW's Library of American Comics books, he's also written for both Marvel and DC, and some of you may recall a classic one-shot from the latter company called Batman Chronicles: The Gauntlet, in which Bruce and our mutual friend, artist Lee Weeks, told the never-before-revealed story of Dick Grayson's first adventure as Robin. Bruce is the Genuine Article, a real heavy hitter, and he writes my characters almost as well I do (though he's a nicer guy than I am, and so his story, "The Prunes of Ire," displays a level of good-heartedness that our normally crusty and cynical space-faring weiner-nose usually keeps well buried).

Third, the volume will also include 19 pages of brand-new story material, created by me just for this book. And in 19 pages, somehow I've got to wrap up the whole "Earth-Lockhead" plot-line and set the boys up for the years ahead. I'll either succeed or I'll fail spectacularly, and either way it's sure to be worth checking out.

What, you haven't read Quirk before? Join the club! No, I mean join the legion of Fwoink Patrol members at Quirk's own website, found right here: http://quirk-the-comic.blogspot.com. There's lots to see, including details of the first two volumes of this series and the original B&W series that launched the character more than thirty years ago -- with more coming soon.

OK, I  think I got through that mostly without resorting to Stan Lee-isms. 'Nuff said!