It's REPOSSESSION DAY! QUIRK graphic novel volume 2 is OUT! 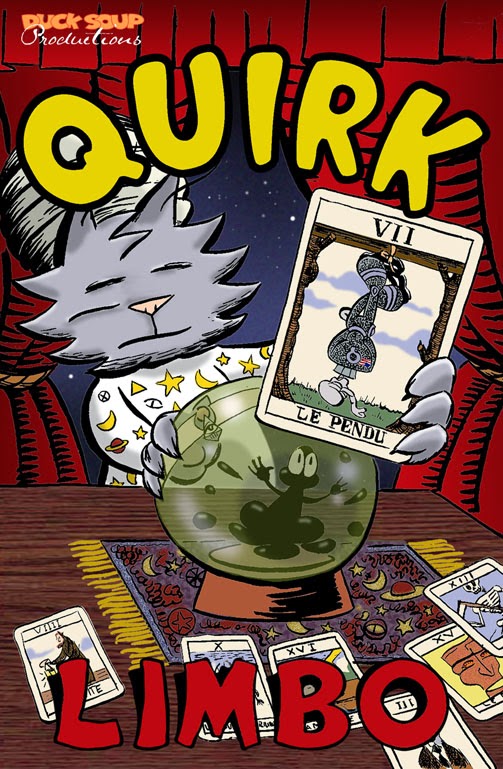 In volume 2 of QUIRK, all hell breaks loose for our space-faring misfits, and everything they know is changed forever! Four complete stories fill this 62-page volume; that's well over a year's worth of story and strips from the original weekly webcomic!

In Termination Alley, Carpy and the Frigid are repossessed by their original owners! In Limbo! Quirk, Smith and Sludge are set adrift in deep space, trapped in a bubble of slime, while Carpy fights alone deep inside the HEADquarters of Lockhead Dynamics! In Down to Earth, Quirk and his pals run afoul of The Mad Artmeister of the Spaceways, The DALAI DADA! And in Planet of the Amazon Cowboys... well, you get the drift, but watch out for an original "twist" that will affect the entire future of our four (or is it three?) friends.

New to Quirk? No sweat! Visit our growing Quirk mini site, where you'll find most everything you need to know about the series, including the trailer for volume 1.

But wait! The book news is not over! The Circus Tarot Book is coming in under two weeks. It's the direct supplement to our Tarot of the Zirkus Magi, and it's as loopy as you'd think. What's that, you haven't heard of Tarot of the Zirkus Magi? You been livin' under a rock or something? High yourself to the deck's mini-site vis this link.

Still not had enough? I published seven book titles and a deck of cards in 2013, and I am not stopping there! Lots more is coming in 2014, including two nonfiction titles (Bookman: The Life and Work of Louis G. Huntoon, a True American Primitive and Flickers and Other Diversions), a new fantasy novel (Baxter Bunny Escapes), our second children's book (Bear House), a third volume of Quirk, the complete 78-card version of Tarot of the Zirkus Magi.  Aiieeeee! Is there enough caffeine in the universe to make all this possible? Who knows? But it will be fun finding out...