As I Sat Sadly By Her Side 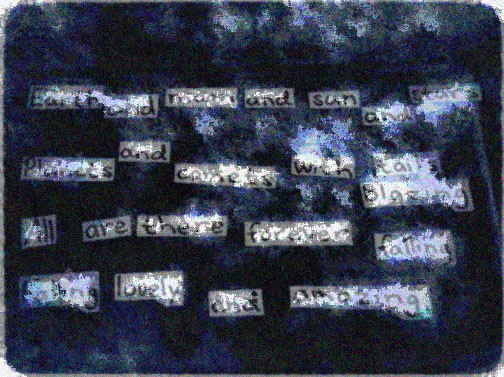 I was going to title this one “Ready for my Mood Swing Now,” but this morning a marvelous, mournful tune by Nick Cave and the Bad Seeds is playing inside my head, so it seemed appropriate that I follow the lead of my subconscious and just “Cave” in. Sorry.

I learned about Cave and his group from a casual co-worker friend back in my Thorndike Press days. I suspect that she wanted to be something more than just a casual co-worker friend; she gave me music, which years after the fact I think must be a dead giveaway. But I had already decided that I’d taken enough Punishment on the wartime front of Romance to last the rest of my life, and that went double for women that I worked alongside.

Which effectively rules the whole thing Right Out — I’m so socially maladjusted that the only place I meet women is at work. Asperger’s.

If you like your music Deep and Dark and Ballsy, Nick Cave and the Bad Seeds are a great discovery, by the way. Every time I listen to them I mentally thank that woman, wonder where she’s at and wish her well —  a lot better than how I think of some of the women I’ve actually been involved with. Thank goodness it isn’t a terribly long list.

May was a tough month. On the second, my Mother’s birthday, I woke in a deep, syrupy depression the likes of which — thanks to drugs — I had not felt in some time. It never really went away. Still hasn’t. I guess more than anything else what I’m feeling is the weight of Time. Three years now since she died, we’re all three years older, and what is there to show for that? To say that “I’m still here” seems like a shallow victory at best. Sometimes I look back on the family that we used to have, and imagine that for all of its being repressed and constrained and deep-down cracked and broken in its bones as it was, it was still a family and it was all we had… all I had at any rate. Dad and my sister managed to move on fairly early.

Dad is now in his late eighties, and although he is doing a very danged lot better than about a bazillion other men his age, it is starting to show. In the last year he’s developed that Old-Man walk… the walk of someone trying to keep steady.

Things are better now between us than they have ever been, really. There’s been some deep-sea shifting on both of our parts. He still has nearly all the behaviours that drive me crazy, but I’m getting a lot better at managing my feelings about it. Like — about a week and a half ago he showed up unannounced at my back door at 10:45 in the morning. I had just gotten up, had just finished feeding the quats, was still in my jammies, had not even taken my morning meds or had my morning coffee.

Even a year ago, this would have infuriated me. Actually, it still did — but I was able to, so to speak, take myself aside and give myself a good talking-to. Eaaaasy, baby! said Ben Vereen to John Rubenstein in the original Broadway production of Pippin (the last stage work of Bob Fosse — I saw it just a week after Irene Ryan [Granny to both The Beverly Hillbillies and the title character of Pippin] died suddenly and was replaced by her understudy… the show must go on, after all). And that’s what I said to myself. I made Dad breakfast and we sat down and had a really nice impromptu visit. In my jammies.

The man that I knew as a child would never have been there for me in these past three years the way that he has been. He was never there for any of us, least of all Mom, in those days. It’s taken me a while to make the mental adjustment, but I’m working on it.

Somehow during the month of May, despite the depression and despite bouts of extreme laziness and despite taking time away to do some freelance work to pay a bill or two, I managed to finish the first draft of my next novel. The pride of that was short-lived: all I have to do is remember that no one will read it because as history shows, “If I Build It No One Will Give a Shit.” And why should they? Although conceived as a commercial work, my first attempt at what’s recognizably a genre novel, the fact is that I’m writing it… and so of course I’ve done everything in my power to subvert the genre and turn it into a completely insane, whacked-out freak fest from beyond the Lunatic Fringe that will likely just put most people Right Off.

Hey, it’s what I do. The evidence is all around you.

Given the way that the month of May shaped up, I guess it’s no wonder that I actually jumped off the wagon a couple of times and murdered a couple of bottles of perfectly good vodka. Okay, maybe it wasn’t perfectly good. My thinking, both times, was that “There’s no reason at this point why I shouldn’t be able to drink like a normal person.”

Hah! There may not be any reason, but the fact is that I can’t. Once I start, I can’t stop until the bottle is dry — however long that takes. Both experiences were So Completely Negative that they were actually Positive… because I was given the evidence, which apparently I needed, not just that I can’t do that anymore, but really, really deep down, I don’t want to, no matter what that teeny little Red Guy standing on my left shoulder might be whispering in my ear. It’s not just that it comes at too high a price: it’s all those hours, days, lost in the realization that I’m so not having a good time.

Last year I finally found the word that Explained Everything… and now the AMA, in their infinite wisdom, is taking it away from me.

You may have heard about it. In the new edition of their Big-Ass Book, the Boneheads in the Brain Business have vaporized Asperger’s as a valid diagnosis and just lumped it all up with the rest of the Autism Spectrum.

It makes me want to hit somebody. Never mind the people like me, it’s really not fair to the severely autistic patient to have their condition minimized by being merged with far more functional types who suffer from Asperger’s. It takes a diagnosis that was elegant in its specificity… and makes the whole thing muddier than a country road in the spring. Thanks a lot, you “geniuses” of the Inner Clockworks. Go fuck yourselves.

It occurs to me that what I should have typed in the last ‘graph was “muddier than this post.” I haven’t gone off like this is quite a while. Hope it’s at least entertaining.

About the only thing I can do to tie it all up in a neat and pretty bow is to put on the title track by Mr. Cave and marvel at its painful beauty. Listen:

"When will you ever learn
That what happens there beyond the glass
Is simply none of your concern?
God has given you but one heart
You are not a home for the hearts of your brothers

And God does not care for your benevolence
Anymore than he cares for the lack of it in others
Nor does he care for you to sit
At windows in judgement of the world He created
While sorrows pile up around you
Ugly, useless and over-inflated"

Thanks, Nick. Thanks, Amy. This was the month of May.