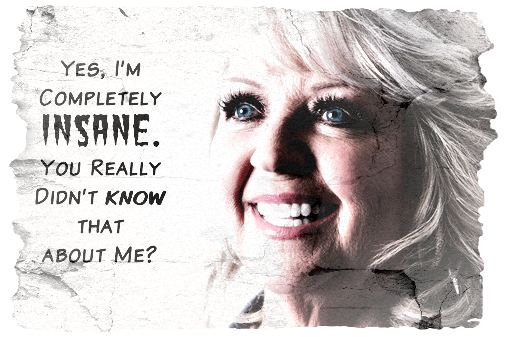 I think it was the humorist Allan Sherman, he of the great “Camp Granada” songs, who published a piece in one of his books all about how silly it was to take offense to certain words. The particular word that he used in his piece was “fuck.” After a few introductory paragraphs he proceeded to fill an entire page with the same word, repeated over and over again: “fuck fuck fuck fuck fuck fuck fuck.” Then he came back and said something to the effect of, “you see how silly it is to let a word rile you up? It’s just a word.”

Now, I may have to use an offensive word in this post and I’m not going to be coy about it; I’m not going to use a namby-pamby euphemism like “The N-Word.” My only concession to your sensitivity will be to surround the word with quotation marks. If the word offends you in the context of what I am about to write, then you have my deepest sympathy. I’ll go out for a box of kleenex.

What brought this on? Paula Deen.

Is Paula Deen a bigot? Gosh golly, gee whiz, y’think? She’s a self-admitted Redneck of a certain age from the deep south, I’d say that the possibility of her bigotry ranks about a million volts on the Likelihood Meter.

I’ve never liked the woman. That hasn’t changed in light of what the media likes to call “Startling New Revelations.” But I’m not going to be one of the people out there all fired up and ready to burn her as a witch because of the “shocking” discovery that she has uttered the word “nigger” a time or two in her life. Hello, of course she has. Is anyone surprised by this?

Furthermore, is there any English-speaking American out there who has never used the word themselves? NEVER? Think about it — never’s a long time.

I did read the deposition that Ms. Deen was forced to give in the course of lawsuit against her and her brother, and I was made extremely uncomfortable by it. Not for the reasons that most others might have. It seems to me that if Ms. Deen is guilty of anything, she is guilty of Extreme Stupidity and of answering — honestly — some unreasonable questions from a badgering lawyer.

I’m looking at this from the standpoint of a professional writer. We are treading on some very shaky ground the minute we start to make a word, any word, illegal.

You cannot legislate hatred out of existence by making the language of hatred illegal, for the same reasons that you cannot alter the past to suit the political needs and sensitivities of the present. Furthermore, by making certain words verboten (I use the German word for specific reasons), you tie the hands of creative and reasonable people alike who just want to have the whole of the English language — with all of its archaisms, vulgarities and, yes, hatefulness — at their command.

So, I don’t approve of the backlash against Ms. Deen any more than I approve of removing all the instances of the word “nigger” out of The Adventures of Huckleberry Finn. The word is in the book. It’s history. Deal with it. Grow up.

It exists. It’s there. People need to know that it’s there. And if anyone who has ever used the word under any circumstance was publicly pilloried as is happening to Ms. Deen, then, y’know what? Everyone in the nation would be tried and pilloried.

Have you never touched yourself in a public restroom? Have you never used the word “nigger?” I have. As children my generation used it repeatedly in rhyme, not knowing what a hurtful word it is. And I use it now, in quotations, because I won’t be a hypocrite when it comes to language and pretend that it’s any better to say something like “The N Word.”

If none of this makes any sense to you, then reflect on the words of a better man than I am: "Let him among you who is without sin cast the first stone."

Is Paula Deen a bigot? I think that there are a lot more important questions out there.